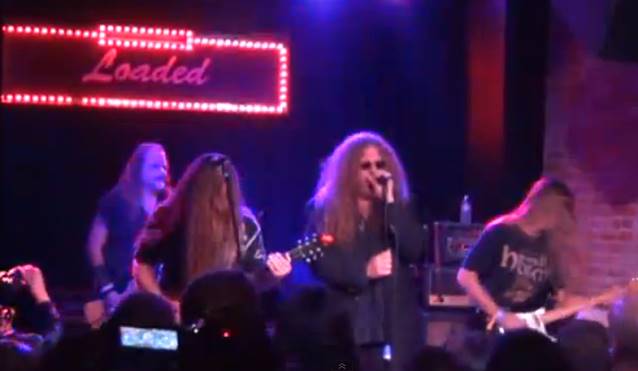 Olson rejoined THE SKULL in August, explaining in a statement: "I know that I've mentioned that I wouldn't perform TROUBLE's music anymore unless it's with the other original members, but I've had a change of heart. I want to rock again.

"Although I have been having a great time playing keys for IN-GRAVED (led by former PENTAGRAM guitarist Victor Griffin), I miss the drums and playing classic TROUBLE songs. I'm still going to jam with Victor, but there is room for THE SKULL too."

He added: "In just a few short months, 2014 will mark the 30th anniversary year for TROUBLE's debut record, 'Psalm 9'. TROUBLE guitarists Rick Wartell and Bruce Franklin are having fun with their new record, and I had fun writing some intros for it. It's just that Eric, Ron, and myself want to jam too and celebrate our 30th anniversary as well with a tour and a new record. We've worked just as hard as Bruce and Rick over the years and we feel that we've earned the privilege to celebrate with the fans as well. There is no animosity between the two bands and we intend to keep it that way."

"We are currently writing a debut record, set for release in 2014 and I've already submitted several songs to the guys. Excitement is in the air."

THE SKULL's debut CD will be produced by Billy Anderson (HIGH ON FIRE, SLEEP, NEUROSIS) this autumn in Portland, Oregon and will be released via as-yet-undetermined record label.