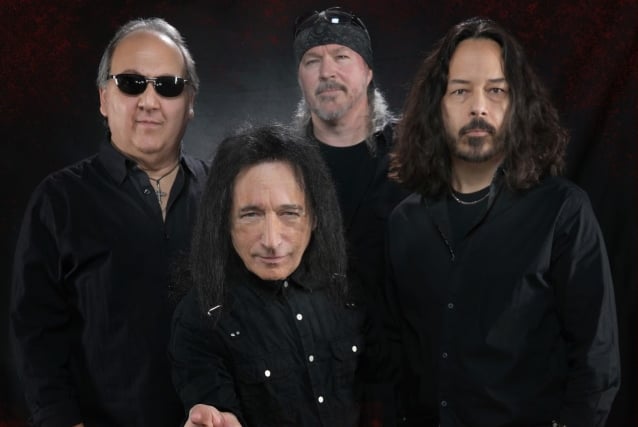 THE RODS are currently writing songs for their new album, "Shockwave", tentatively due in 2021.

Canedy has checked in with the following comment: "This new version of THE RODS happened quite by chance. David and I have both worked with Freddy Villano, both live and in the studio. Freddy and I became a killer rhythm section within two songs of our first gig together. It was surprising how well our styles meshed. We've all been friends for several years now so when it came to choosing a new bass player, there was no other choice… Freddy was the man!

"Michael and I have performed live several times and we recorded the new CANEDY album together. I knew that Michael and I worked well together. Since David and I had been discussing adding a lead singer, I brought Michael to a rehearsal to sing a few songs. It was basically to see if we were even interested in adding a singer, and, of course, we were a fit for him. David and Michael sat together in one of David's studio rooms for over an hour while I prepared my kit for rehearsal. I knew when they both walked out of the room smiling that we had a new lead singer.

"We have dates booked beginning July 3rd and once the world is no longer under siege, we'll be announcing additional dates. It really feels great to be working on a brand new album with the added energy of Michael and Freddy. 'Shockwave' is the perfect working title for our new album.

Feinstein has checked in with the following additional comment: "Michael and I spent some time talking together about our approaches to music, where wanted to go with our songwriting and live performances and our philosophies on life. It became apparent that there would be a strong synergy with this new lineup. I will be still be contributing to vocals. However, now I can focus totally on playing my guitar — something I love to do… as loudly as I can! I'm excited about this new chapter of THE RODS. Carl and I are already writing songs for our new album 'Shockwave', and with the addition of Michael, we can expand our melodies arrangements to fit his amazing range and style!”

Michael San Ciro said: "Nothing happens by accident, and fortune favors the prepared. For my whole career, I have tried to position myself to be ready should I get 'the call.' But I never thought I was going to get 'this call'; the call from some of the veterans who helped shaped the genre I love. I am here to answer that call."

Villano said: "Wow! When something comes full circle, it completes a cycle, returns to its beginnings. I saw THE RODS open for IRON MAIDEN on 'The Number Of The Beast' tour at the North Stage Theater in Glen Cove on Long Island. It was my first concert! I didn't know who THE RODS were before that, but their performance was electrifying.

"The invitation to hold down the bass chair in THE RODS is an honor, as I know I'm following in the footsteps of some incredible musicians. I look forward to simultaneously honoring the past and forging the future."