Denmark's Antenna magazine recently conducted an interview with Michael and Morten Stützer (both guitar) of the reactivated Danish thrashers ARTILLERY. A couple of excerpts from the chat follow.

Antenna: Why was the time all of a sudden right for ARTILLERY to reunite?

Morten: I think the most important reason is that all of us are committed to the band. None of us are borrowed from other bands and we all want this to happen. We're making this happen in a serious way, but still as a hobby. It has to be fun to play the music.

Michael: It matters that we have a vocalist who shows up for rehearsals.
That's exceptional. Someone that we can bond with. It has been an uplifting experience to the band.

Antenna: What took you so long to get another vocalist — why not 10 years ago?

Morten: It's difficult to say. I think a reason could be that… if we had stuck together as a permanent core, it would have been much easier to replace the vocalist, but since only Michael and I were left for the recordings of "B.A.C.K." [1999], it would have made no sense to introduce a new vocalist. It would not just be a new vocalist, but also two new band members on bass and drums, three in total. It would be a new band. We could hardly defend to call it ARTILLERY in that way.

Michael: As a minimum, you must be three "original" members.

Morten: If the band is running, it's much easier just to supersede the vocalist, but when you're starting up from the scratch, you must have more original members in the band. And that's the main reason.

Antenna: Michael, I remember talking to you some time ago, before ARTILLERY got back together and employed Søren Adamsen as a vocalist. You mentioned some new material that you wanted to record, possibly with the aid of Morten. Were you hoping that this would eventually lead to a full-fledged reunion of ARTILLERY?

Michael: The tracks weren't written for ARTILLERY, but I'm sure that they would fit if adjusted and changed a little. Morten has written some tracks as well.

Morten: We need to take the time to review our material. The music must never be over-produced, though.

Antenna: Where will you land with your new material?

Michael: We've got one track, though, that we don't manage to fit in on any of the albums we've made so far.

Morten: If we look on the overall idea of the new tracks, they're most likely closer to "By Inheritance" than "Terror Squad", but it won't be a "By Inheritance - Part II". You never know where you are until the album is finally out. You never plan more than you can change while making the album.

Michael: It's much easier to say what it won't be… It won't sound like HATESPHERE, for instance.

Antenna: Is the best yet to come?

Morten: We hope so! If and when it comes!

Read the entire interview at www.antenna.nu.

Poland's Metal Mind Productions released "One Foot in the Grave, The Other One in the Trash" on June 16 in Europe and August 5 in the USA (via MVD). According to a press release, the DVD features "a fantastic gig the thrash veterans gave at Metalmania Festival 2008. The outstanding guitar play of brothers Stützer, charismatic Carsten Nielsen's powerful drums and the uncompromising thrash energy of Søren Adamsen's voice ruthlessly hammered their way into the hearts of the headbangers assambled on that occasion. ARTILLERY launched a veritable blitz, bombarding their fans with a skull-breaking selection of some of the best songs from their entire discography, including great thrash metal masterpieces like 'By Inheritence' and 'Khomaniac'!" The DVD will also include many great bonus features, such as extra video material: "Allergic to Knowledge" (video clip), "Terror Squad" (video clip), "The Almighty" (bootlegged at The Rock, Copenhagen, 2008), MISSING LINK – "Lobotomized" (video clip), plus interview with Michael Stützer, interview with Morten Stützer and Carsten Nielsen and more. The release will also be available in a limited edition — including a CD with songs recorded at the Metalmania Festival. 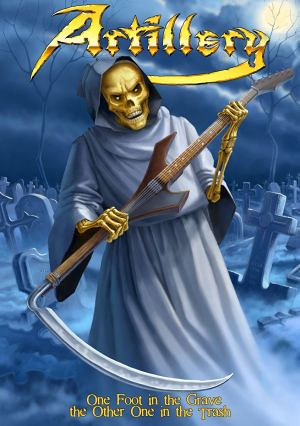