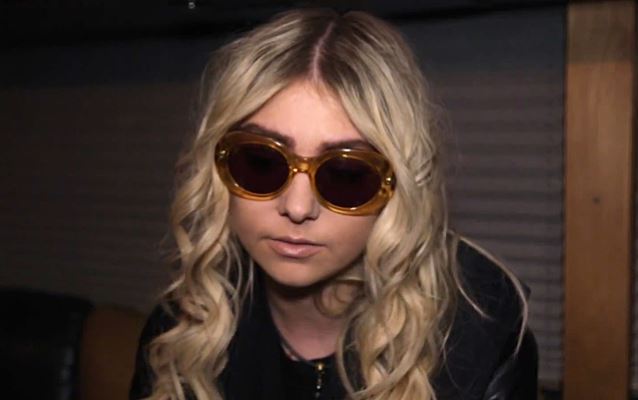 TeamRock recently spoke to members of THE PRETTY RECKLESS and got their touring confessions. Check out the clip below.

THE PRETTY RECKLESS singer Taylor Momsen told TeamRock that she hasn't really had a chance to begin working on songs for the band's follow-up to last year's breakthrough hit, "Going To Hell", explaining, "I'm always jotting down ideas and things, but it's hard, for me at least, to write on the road, 'cause it requires isolation for me. I need to be alone with my own thoughts, and you're never alone on tour. You live on a bus with twelve people, so you're just constantly around people. And you're constantly working on tour, so there's really never enough time to sit down and actually focus."

Momsen added, "I've got little pieces of things here and there. But it'll be done when it's better than 'Going To Hell'. I always say, I'm not gonna put something out that's not better than the last work that we did, so we have to beat ourselves every time. And that can take forever, or it could magically happen in a week."

Momsen told The Pulse Of Radio that she's never sure when the inspiration for a new song is going to strike. "It's different every time," she said. "There's no real process or anything. I mean, the writing dictates where the song goes and how it comes together, and my joke is that if I knew where inspiration came from, I'd move there."

"Going To Hell" came out last March and yielded two No. 1 rock hits with "Heaven Knows" and "Messed Up World", making THE PRETTY RECKLESS the first female-fronted act to have its first two singles both hit the top spot.

Before getting to work on an all-new studio effort, the band intends to complete an acoustic set that will feature unplugged versions of the songs on "Going To Hell".

THE PRETTY RECKLESS will open for NICKELBACK on a lengthy North American tour that begins February 14 in Allentown, Pennsylvania.