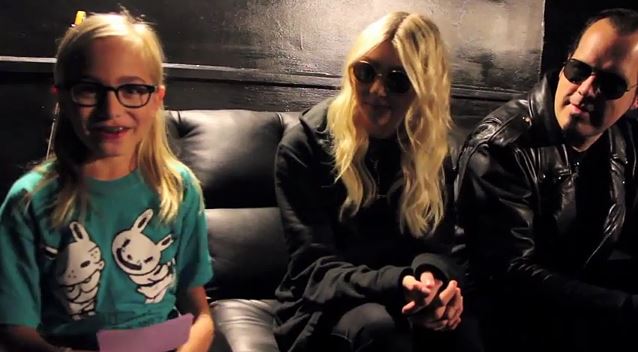 Piper of KidsInterviewBands.com conducted an interview with singer Taylor Momsen and bassist Mark Damon of THE PRETTY RECKLESS on October 28 at the Newport Music Hall in Columbus, Ohio. You can now watch the chat below.

THE PRETTY RECKLESS is working on an acoustic album, according to an interview Momsen did with a North Carolina radio station. Although it's only been seven months since the band issued its "Going To Hell" album, Momsen revealed, "We just recorded an acoustic version of a medley. It's how we originally wrote the songs, so it's kind of an inside take, or look, into how 'Going To Hell' actually started. 'Cause everything started acoustically."

Momsen added, "If you can't play it all the way through, front to back, on an acoustic guitar, then it's not a good enough song to bring in the band."

Guitarist Ben Phillips told The Pulse Of Radio that THE PRETTY RECKLESS doesn't have one set way to write a song. "I think the purpose is the only consistency," he said. "Our purpose is to hopefully come up with a really unique, clever, good quality idea that could last years, years and years of playing and touring and whatever. We'll sit with things to see if we like it, we'll drop it — so we really have an ethic of how we want the songs to come out."

The acoustic album does not have a release date yet, but is likely to arrive sometime in the next few months.

THE PRETTY RECKLESS released their debut album, "Light Me Up", in 2010 and followed it up last March with "Going To Hell".

"Going To Hell" has yielded two No. 1 rock radio hits with "Heaven Knows" and current single "Messed Up World", making THE PRETTY RECKLESS the first female-fronted act to have its first two singles both hit the top spot.