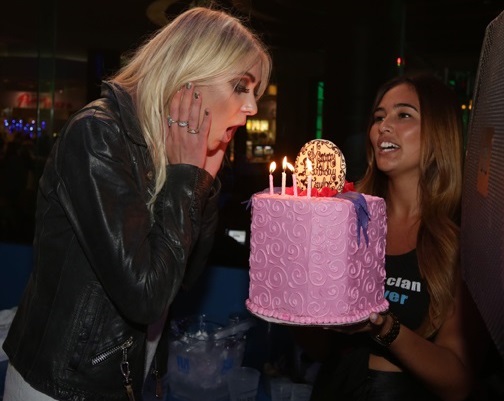 THE PRETTY RECKLESS' Taylor Momsen celebrated her 21st birthday this past weekend as she hosted a party at the Harrah's Pool Party in Atlantic City, New Jersey.

In addition to the event, Momsen's fans celebrated her birthday with a record-breaking birthday card, which tallied over 14,000 signatures and over 38,000 site visits in one weekend. This card breaks the previous record as held by Robert Downey Jr., who in 2013 was presented with a Guinness World Records certificate for his 5,339-fan-signed greeting card.

THE PRETTY RECKLESS recently unveiled a racy new video for the song "Messed Up World (F'd Up World)", the next single from the band's second album, "Going To Hell". Momsen co-directed the steamy clip with Jon J.

"Going To Hell" was released in March and debuted at No. 5 on the Billboard album chart.

THE PRETTY RECKLESS recently finished a run of festivals in the U.K. and is playing scattered events back home in the U.S. throughout the summer.