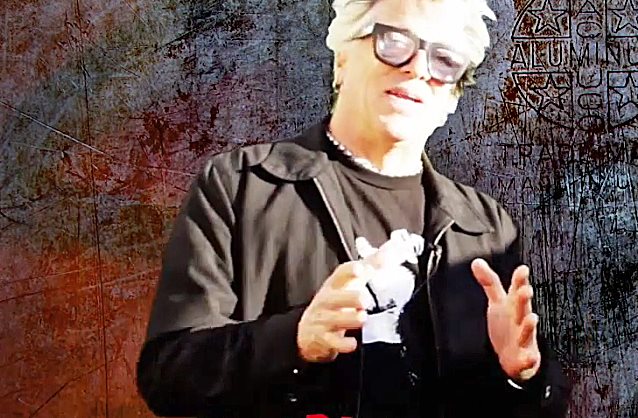 THE OFFSPRING lead guitarist Kevin "Noodles" Wasserman has confirmed that the band is continuing work on material for its long-awaited tenth studio album — two years after releasing a single called "Coming For You". Speaking to Kilpop's Tina Smash at this year's Carolina Rebellion festival, which was held May 5-7 at Rock City Campgrounds at Charlotte Motor Speedway in Concord, North Carolina, he said (see video below): "We have songs that are done. Like, 'Coming For You' is a good example of… That's actually gonna be on the next record; that was the first single. So everything that we're doing will be kind of like that. There's gonna be plenty of just meat-and-potatoes OFFSPRING stuff — the hard, fast, melodic kind of stuff [with] heavy bass and drums and guitars. That's what we love."

Noodles also talked about the way audience interaction has changed in the digital age and whether it makes sense for a band like THE OFFSPRING to continue releasing full-length albums.

"It's a different world now," he said. "We think, 'We've gotta make a record.' We think of music as coming in whole albums; that's the way we grew up, so that's still the way we feel. But since you have the Internet and you can release things almost instantly, why make the fans wait? I think the fans are the ones that [constantly say], 'Hey, man, we want stuff now.' I hear that every day, all day long on Twitter and on Facebook and stuff: 'Where's the new stuff? We want stuff now. We don't wanna wait.' Well, in this day and age, you don't really have to wait."

THE OFFSPRING issued its ninth album, "Days Gone By", in 2012. It spent 2014 on the road promoting the 20th anniversary of its breakout album, "Smash", by performing the disc in its entirety at a number of shows.

In April, THE OFFSPRING played its 1992 album "Ignition" in full at a benefit show in Berkeley, California, to celebrate the 30th anniversary of 924 Gilman, a nonprofit music and art community space.

A few weeks ago, Noodles told the Phoenix New Times that THE OFFSPRING has "been really lucky" in that the band has "had a bunch of success" and is able to do what they love to do despite a steep decline in recorded-music sales in the last few years. He said: "We don't have to get day jobs. [Laughs] I hate when I see one of my fave bands, like someone that's super-influential and consistently making good music, and they have to get day jobs and can’t just do their music. And that's unfortunate. So when bands that are heroes of mine… to see them struggle and deal with the Internet and piracy, it's a problem. We personally benefit from the Internet being relatively a free exchange of ideas. It's mixed feelings; gotta take good with the bad. I love I can get on Twitter and get feedback from fans immediately and share ideas. It's more positive for us."