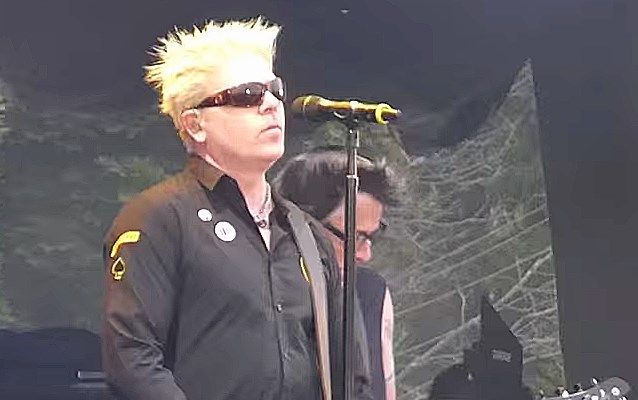 According to The Pulse Of Radio, THE OFFSPRING has sold the rights to the band's entire catalog of Columbia Records master recordings and the publishing rights for all its songs to Round Hill Music, with the New York-based company paying $35 million. The band sold the recorded masters for the six albums it made for Columbia Records, along with the publishing rights to the songs on all nine of its studio efforts. The master recordings for the band's first three albums remain with Epitaph, the label that originally released them.

Among the Epitaph albums is 1994's "Smash", the breakout blockbuster that sold more than six million copies in the U.S. and featured the hits "Come Out And Play", "Self-Esteem" and "Gotta Get Away".

Included in the Columbia catalog are 1997's "Ixnay On The Hombre", which sold 1.4 million copies, 1998's "Americana", which moved five million, and 2000's platinum-selling "Conspiracy Of One".

THE OFFSPRING have sold a total of 17 million copies of their nine albums to date.

Frontman Dexter Holland told The Pulse Of Radio that he thinks THE OFFSPRING's albums have all had a consistent style. "I think that there's a thread that runs through all of our albums, for sure," he said. "I mean, people say there's a sound to our band. I don't know exactly what that sound is, but people seem to recognize it when they hear our records, and like any of our other records, there are songs that people might not expect to hear from us, but people seem to know it still sounds like us."

Holland said in a statement about the catalog sale, "We felt that having the right caretaker for our catalog, both the masters and the publishing, is incredibly important to the future of our career."

Round Hill Music chairman/CEO Josh Gruss said about the acquisition: "You won't get a more high-quality catalog than THE OFFSPRING. Also, we didn't have some American punk rock in our publishing portfolio, and this acquisitions helps broaden the genre representation."

THE OFFSPRING have reportedly spent much of the last year working on the follow-up to their last album, 2012's "Days Gone By". A single called "Coming For You" surfaced last February, but no further details on the new album have emerged since then.