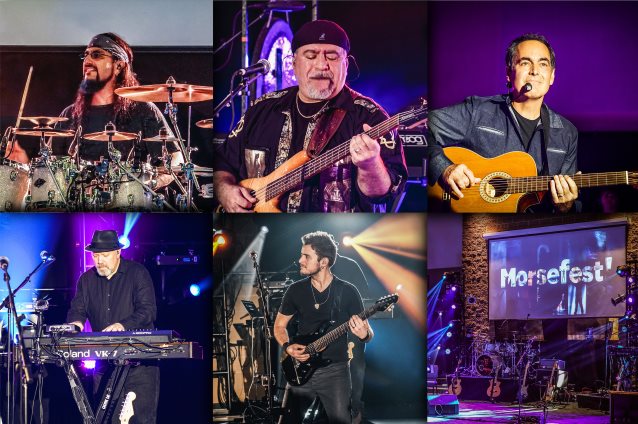 Hot on the heels of 2016's most acclaimed progressive rock release, "The Similitude Of A Dream", THE NEAL MORSE BAND announces the massive live release of a once-in-a-lifetime concert event: "Morsefest 2015" on March 24 via Radiant Records via Metal Blade Records/Sony. Pre-orders are available on Radiant's web site starting February 13. A trailer for the package can be found on Neal Morse's official YouTube page.

In addition to THE NEAL MORSE BAND, featuring drummer Mike Portnoy, the 38 musicians on stage create a prog orchestra. Over two nights (one on each video disc) in 2015, they perform new arrangements of material from Neal Morse's career. The two concerts span over five hours, venturing beyond the studio versions they're based on. In addition to complete performances of the "Sola Scriptura" and "Question" albums, there are songs from SPOCK'S BEARD (featuring guest Nick D'Virgilio), TRANSATLANTIC, and surprises — including performances with guitar legend Phil Keaggy. Accompanied by extravagant visuals, including three video screens and live dancers, "Morsefest 2015" is the most massive live release of Morse's career.

Free from the constraints of studio recording deadlines, Morse added any instrumentation he imagined, including live strings, a five-piece horn section, and a 14-piece choir (in addition to background singers, and the vocals of the band). At the center is THE NEAL MORSE BAND: singer/guitarist/keyboardist Neal Morse, drummer Mike Portnoy, bassist Randy George, keyboardist Bill Hubauer and guitarist Eric Gillette.

"'Morsefest 2015' was an epic show with epic music and epic performances! The studio albums that we played this time are two of my very favorites, and some of the additional songs that we played have never been performed before!" said Randy George.

Complementing this level of musicality is a multimedia visual presentation. It begins with the most elaborate lighting set-up Morse has ever used, constructed specifically for this event, designed by Ryan Proplesch. A video graphics track, projected on three screens, was created by media artist Christian Rios to illustrate every moment of each song. Live dancers provide further visual interpretations, adding a dimension to the performance that is rare in progressive rock.

In addition to both concerts, a one-hour documentary puts audiences behind the scenes for this epic event. Featuring candid moments from the band, other musicians, and crew — it's an engaging glimpse into the whirlwind staging of this event.

Sonically, outstanding audio is delivered by veteran mix engineer by Rich Mouser, who has helmed every Neal Morse, SPOCK'S BEARD and TRANSATLANTIC studio album. The package is presented as either 2 Blu-ray discs, or 2 DVDs with 4 CDs. Digital downloads of the music portion will be available from Radiant Records in uncompressed audio, and on iTunes. The classic "Testimony" album will also be available for first time on vinyl.

Said Neal Morse: "'Morsefest 2015' was absolutely incredible for me! We performed 'Question' and 'Sola Scriptura' plus a lot of other really cool stuff with full choir, horns, orchestral percussion, strings, piano harp, Cuika and dancers! The artwork on the video wall was absolutely mindblowing. Combine that with the atmosphere of the community of fans and the love in the room…it was definitely a peak experience in my career, and I think the DVD and Blu-ray are among the finest we've ever produced."

"Morsefest 2015" happened only once. Viewers can now experience it any time, with stunning visuals and audio fidelity. And audiences can hear the next chapter of THE NEAL MORSE BAND, performing "The Similitude Of Dream" in its entirety, across Europe and selected world locations, throughout the spring of 2017. 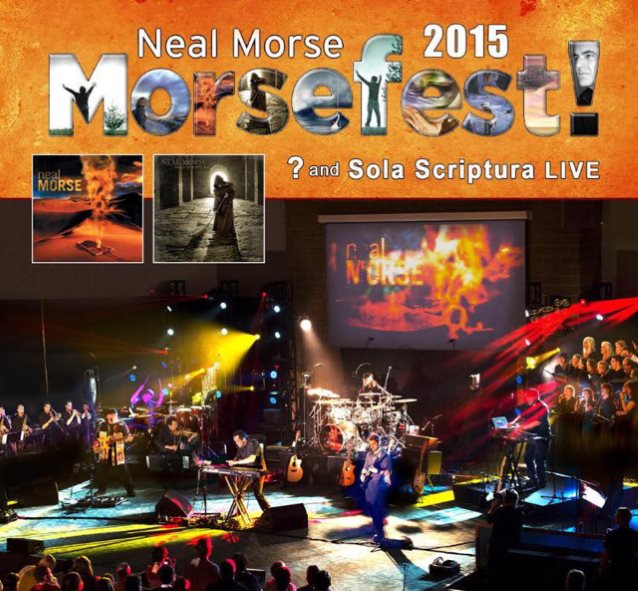