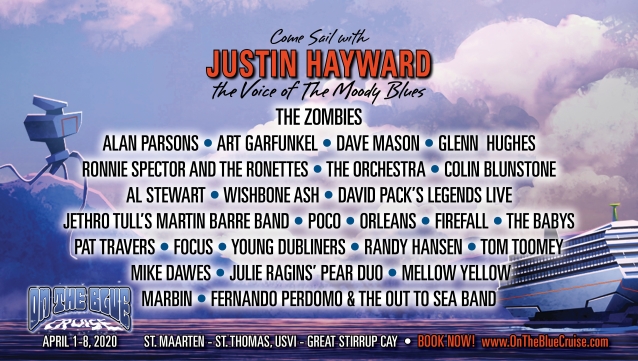 On The Blue, one of the leading music cruise experience producers over the past 20 years, has announced the details for the second sailing of the On The Blue cruise in 2020. The 2019 inaugural voyage was a huge hit with fans, resulting in a complete sell-out.

This full ship charter cruise goes on sale to the pubic beginning today (May 7) with cabins prices starting at $1,699 per person (double occupancy). In addition, a fee supplement is mandatory and will be added to the reservation for government taxes, fees and standard gratuities.

Musical host Justin Hayward's performances will include songs from his solo archives along with deep cuts from five decades of material from THE MOODY BLUES. Attendees can expect some familiar faces from Hayward’s Moodies past to join him on stage, along with a variety of classic rock legends, including members of six bands in the Rock And Roll Hall Of Fame.

The lineup for the 2020 On The Blue cruise also includes:

In addition, the cruise will be hosted by journalists and fan favorites Sal Cirrincione and Jon Kirkman. Also returning as the official broadcaster of the cruise is the always entertaining SiriusXM's "Trunk Nation", who will be hosting shows daily featuring cruise commentary and artist interviews.

Beyond the many band performances, the cruise will feature over-the-top, well-curated activities such as artist photo experiences, a Mellow Yellow Dance Party, themed-nights, Painting with Rock Stars, and private dinners with bands, with much more to be announced.

On The Blue cruisers will experience the voyage of a lifetime on the intimate Norwegian Pearl. Passengers will revel in NCL's Freestyle Cruising, providing the freedom and choice to enjoy onboard amenities and dining options. Fans can party the night away in 11 bars and lounges, plus dine as they please with freestyle dining at 12 unique restaurants. The ship also features: the very first bowling alley to hit the high seas, a hip Bliss Ultra Lounge, Sports Court, Mandara Spa, Pearl Club Casino and many other amenities are available to pamper passengers 24/7.

Recently, the Norwegian Pearl underwent an extensive makeover and is more beautiful than ever. All staterooms were updated with a refreshed look (featuring cool blue hues, reminiscent of the calming ocean with silver and turquoise accents), new furniture, new carpeting, new headboards, new televisions, as well as the addition of USB outlets to charge handheld devices.

Norwegian Pearl's famed pool deck with Concert Stage, where guests congregate to bask in the sun while watching incredible bands and performers, now features fresh flooring, refurbished whirlpools, and a clean new contemporary look. All restaurants and bars also received a makeover, mirroring the look of the newest vessels from Norwegian Cruise Line.