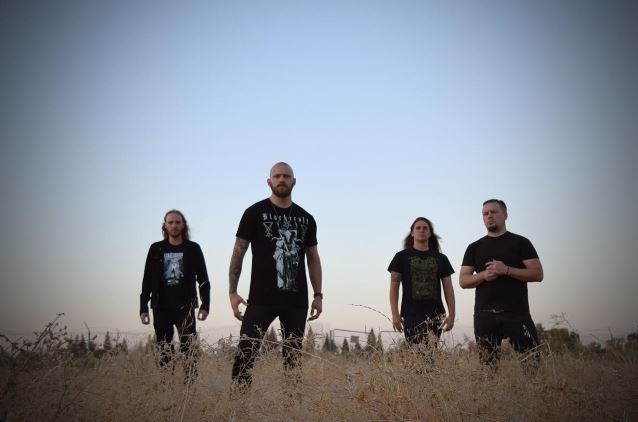 Sacramento, California's modern death metal extremists THE KENNEDY VEIL have welcomed a brand new vocalist to their ranks. Monte Barnard, best known for his time spent as the high-energy frontman for tech-death shredders ALTERBEAST, as well as his live stints with Aussie deathcore titans THY ART IS MURDER, will take the reigns as the new frontman for THE KENNEDY VEIL moving forward.

Monte had the following to say about joining THE KENNEDY VEIL: "I could not be more excited to be working with THE KENNEDY VEIL. I've known these guys for years and played with all of their respective projects prior to THE KENNEDY VEIL. As a whole, they make up one of the hardest-working, most driven bands in the industry, never compromising.

"I have been somewhat of a hired gun for different projects over the last few years, so when they approached me to be the new permanent vocalist, I instantly agreed. The chance to put my creative stamp on such strong material with my close friends would be moronic to pass up.

"We've matured as musicians from different backgrounds and influences that, mixed together, are creating a truly memorable album. I can't wait to show the world what we've been crafting and to hit the road in 2017. Hails!"

THE KENNEDY VEIL had the following to say about having Monte join the band, as well as their amicable parting with former vocalist, Taylor Wientjes: "We know people have been asking, so to clear things up and squash any potential rumors, we parted ways with Taylor earlier this summer due solely to creative differences. There is no bad blood and we are all still friends. Taylor is the permanent vocalist for INANIMATE EXISTENCE, and we are great friends with all of them as well and wish them and Taylor all the best. Having said that, we are super excited to announce that Monte Barnard has joined us as our permanent vocalist moving forward. Monte is a beast and we're definitely stoked to have him laying down vocals on the new record and bringing his high-energy stage presence to our live shows as well. We're all from the same general areas in and around Sacramento and have been fans of his work for years, and we can't wait to see how his high level of energy and creative approach to lyrics will help push us to the next level in the realm of death metal.

"2017 is definitely ushering in a brand new, extra brutal era for THE KENNEDY VEIL and we look forward to hitting the road again and seeing you all soon!"

THE KENNEDY VEIL is currently finishing up the writing process for the follow-up to "Trinity Of Falsehood", to be recorded later this year, with tentative dates scheduled for late November and early December. A spring 2017 release via Unique Leader Records is expected.