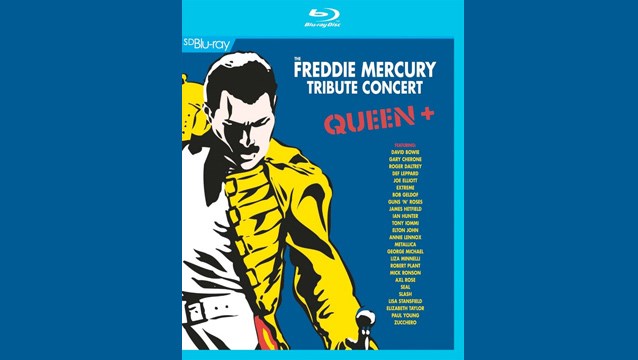 On September 3, Eagle Rock Entertainment will release "The Freddie Mercury Tribute Concert" on a triple DVD set, as an SD Blu-ray — with upscaled standard definition original material with uncompressed stereo and DTS-HD surround sound for the best possible quality — and digital. This release boasts newly remastered sound across both sections of the concert and represents the first time the opening acts' performances have been made available on DVD or Blu-ray.

Check out a trailer for the set below.

On April 20, 1992, Roger Taylor, Brian May and John Deacon, the surviving members of QUEEN, took to the stage at Wembley Stadium for the start of one of the biggest events in rock history, which the band had organized to pay tribute to their former colleague — the incomparable Freddie Mercury. QUEEN were joined by some of the greatest musical talent in the world to celebrate Freddie's life and work and to increase public awareness of AIDS, the disease that had prematurely ended his life the previous year.

As well as being great entertainment, the concert raised a huge and still growing sum of money for the Mercury Phoenix Trust, a charity formed at the time by Roger Taylor, Brian May and QUEEN's longtime manager Jim Beach whose charter is the relief of suffering from AIDS throughout the world. Profits from this release will be donated by the Mercury Phoenix Trust to AIDS charities around the globe.