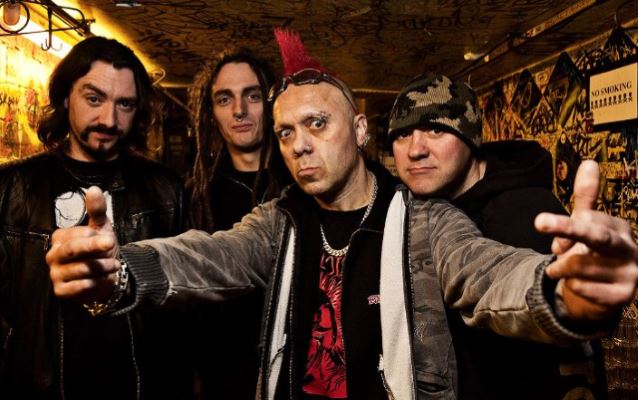 British punk legends THE EXPLOITED have issued a statement in response to an incident last weekend when a Russian music fan was stabbed and killed following the band's show in St. Petersburg.

According to the Russian web site Life, a 27-year-old man, identified only as Igor, confronted a group at the Cosmonaut venue who were chanting what translated to "zigovat." A Google search reveals that this refers to "Sieg Heil," a gesture affiliated to those sympathizing with Nazi beliefs. An altercation ensued and Igor was stabbed in the abdomen. A medical team quickly arrived at the scene, but the man died a short time later.

Authorities are reportedly investigating the situation and are gathering information from eyewitnesses about the whereabouts of any of the assailants involved.

THE EXPLOITED released a statement strongly condemning the attack and reiterating that Nazis are not welcome at their gigs.

The band said: "We have just been told that an EXPLOITED fan had been killed outside our gig in St Petersburg after Saturday's concert. Our condolences go out to his family and hopefully they catch the people who did this.

"There are a lot of people here talking shit as if it is THE EXPLOITED's fault that this kid got killed outside a gig.

"Let's get a few points cleared up. If we had seen anyone sieg heiling at our gig, we would have had them kicked the fuck out. Also, if the people who are talking shit had seen someone do this, then why did they do fuck-all about it? There was 1700 people at the gig.

The group continued: "We had stopped playing five or six times due to the bouncers beating up the punks at the front of the stage.

"Nazi skins or punks are not welcome to our gigs ever."

THE EXPLOITED is in the middle of a European tour, which is scheduled to stop in Athens, Greece Friday night (February 24).

We have just been told that an Exploited fan had been killed outside our gig in Saint Petersburg after Saturday's...