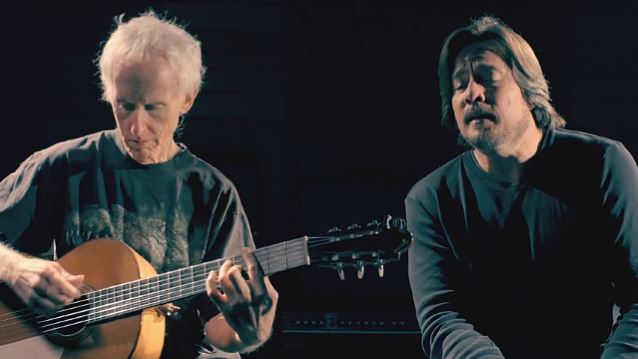 The official video for "Her Bullets Energy", a song from former KYUSS and current VISTA CHINO frontman John Garcia, can be seen below. The track, which features a guest appearance by guitarist Robby Krieger of THE DOORS, is taken from Garcia's self-titled solo album, which was released in August 2014 via Napalm Records. The CD was recorded at Thunder Underground studios in Palm Springs, California with producers Harper Hug and Trevor Whatever.

Said Garcia: "To have Robby Krieger from THE DOORS play on my first-ever solo record was surreal. Not only was it surreal, but to be the first artist ever to record in his brand new studio, Horse Latitudes, in Los Angeles made it even more special.

"I am honored, and humbled by his professionalism and talent and will never forget that experience for the rest of my life... It truly made the song 'Her Bullets Energy' better, not to mention the entire record."

"When I was 19 years old living with Nick Oliveri in North Palm Springs off of San Rafael, I wrote 'Her Bullets Energy' with Nick. I knew that eventually I wanted to do this," Garcia told Coachella Valley Weekly.

"Throughout the years, ever since that first song was written, I've kept a collection of songs in what I call a safe deposit box which in reality was a cardboard box I just traveled with and moved with me.

"These songs that I have are not 'B' sides. They are not leftovers. These are songs that were special to me that I had a personal relationship with. As I got older, as I looked at them every single morning I got up, I started feeling exhausted and felt bad for these songs. I've always wanted to do it. At some point in time, it clicked. I was tired of saying 'yes' to everything and everyone else with the exception of these songs that were close to me. I said no more. I want to finally do this. This project is tangible. These songs are tangible."