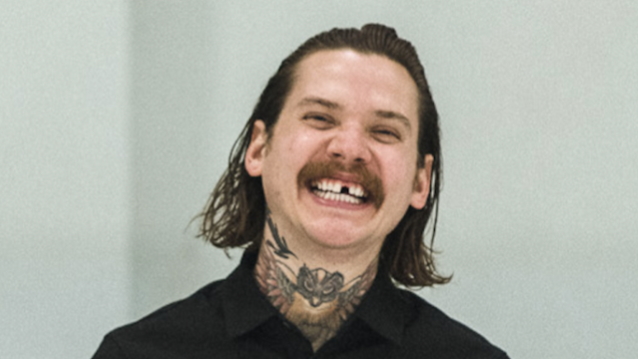 THE DEVIL WEARS PRADA frontman Mike Hranica has launched a GoFundMe campaign to get his "face fixed again" after a puck broke out his implant in early 2020.

Hranica commented: "I recognize this is cosmetic and there are far, far, far more important causes to donate money to.

"I'm not asking for help out of vanity or necessity, but like so many, times have been tough during the pandemic. I have not been able to go about my occupation as per usual.

"I've got a signed twig I'll ship out to one random donor for helping me out."

In addition to fronting THE DEVIL WEARS PRADA, Hranica is an author, having published his third book, "Three Dots & The Guilt Machine", in 2015. That book was, according to Hranica, "a five-year compilation of poetry, prose, and general nonsense... a collection of writing that rarely finishes its breath. A hundred fifty-something pages of what one might consider eclectic truth fiction."

Hranica's first book, "One & A Half Hearts", published in 2013, took a subjective look at the story behind the lyrics from "Dead Throne", PRADA's 2011 album. 2013's "Home For Grave", the writer's second book, was a fictional story inspired by THE DEVIL WEARS PRADA's song of the same name from the band's "8:18" album.

THE DEVIL WEARS PRADA released a new EP, "ZII", on May 21 via Solid State Records.

The original "Zombie" EP dropped all the way back in August 2010 and remains an intense fan favorite. While not a chronological release in the THE DEVIL WEARS PRADA catalog, "ZII" is the next chapter.