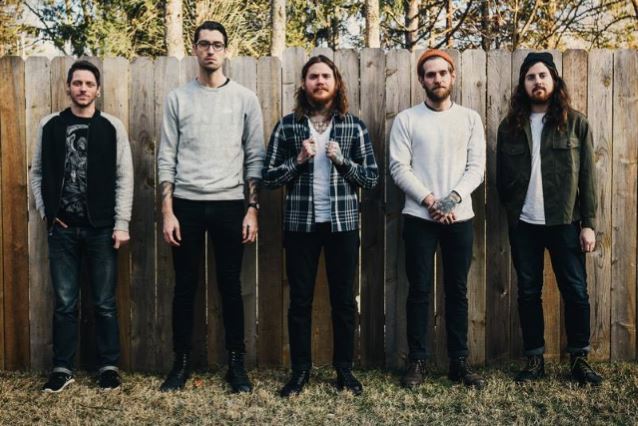 THE DEVIL WEARS PRADA has entered the studio to begin work on its next full-length album, due later this year via Rise Records. The effort will be the follow-up to 2015's "Space" EP, a six-track collection of thematic songs that explored a different point of view of space. The yet-to-be-titled release will be the second featuring new THE DEVIL WEARS PRADA guitarist Kyle Sipress.

Commented THE DEVIL WEARS PRADA singer Mike Hranica: "Along with bringing Kyle into the band, we're also happy to announce that we're recording our sixth, next full-length. We wrote the album in two stints out in Michigan and Wisconsin, and now we're back in Long Island to work with the most excellent Dan Korneff."

THE DEVIL WEARS PRADA will embark on a short, intimate club tour in July, starting at Cleveland's Grog Shop on July 18 after appearing at Chicago's Open Air festival on July 15. The run will wrap up in Springfield, Missouri at the end of the month.

Asked how THE DEVIL WEARS PRADA got involved with producer Dan Korneff, Hranica told The Aquarian Weekly: "I think he had done an UNDEROATH record and that's where I came across his name. Then he mixed '8:18' and a single we did for Record Store Day called 'South Of The City'. He's amazing. He's very professional. Producers can be difficult to work with. Communication can be iffy. But Korneff is totally on top of it and that means the world to us, seeing that we tend to be very hands-on and very nitpicky. So when we had the chance to actually record with him and actually be in the same building as him, it was absolutely amazing. I can't say enough about him."

Regarding why THE DEVIL WEARS PRADA chose to make an EP to follow "8:18" instead of a full-lenth album, Hranica said: "We like mixing things up. It becomes really monotonous to keep shoveling full-lengths down listeners' throats; I feel like it's an easy way to just tire your band out. There are so many great bands that just kept doing the same thing over and over, and even though the records were good, there's still just this decline in interest. We try to avoid that. I know I love hearing the same thing from the bands that I like, and I very much model what we do after my own personal tastes, and I can only handle so many full-lengths. Doing these EPs feels like a breath of fresh air; something to digest differently. Creatively, it's very enjoyable for me and the other guys."