"The Decline Of Western Civilization" box set features a new 2K high-definition scan of each film, supervised by Spheeris. In keeping with the spirit of the rebellious times in which they were shot, the vintage aspects have been respected, and the films retain their original feel.

Spheeris, who also directed "Suburbia", "Black Sheep" and "Wayne's World", regards the "Decline" films as her most personally rewarding work.

"I am so grateful to the fans of these films, and the bands that appeared in them, for their loyalty and patience," she said. "This is my life's work, and I like to think that when I go to my grave, 'The Decline' is what I'll be remembered for."

In 1981 Spheeris was able to book only one midnight screening for the Los Angeles premiere of "The Decline Of Western Civilization". Even though mainstream Hollywood didn't get it, thousands of fans showed up, spilling onto Hollywood Boulevard, and over 300 policemen arrived on scene. "This was a 1,200-seat theater," she remembered, "and they had to add another show at 2:00 a.m. to avoid a riot. Both shows sold out." Police chief Darryl Gates wrote the filmmakers a letter banning further screenings in the city. However, times change, and in 2014 the three "Decline" films were restored by The Academy Film Archive, and screened at the Los Angeles County Museum of Art.

Part of the appeal of "The Decline Of Western Civilization" was its appearance in the midst of a backlash against disco, and slick, mainstream music films. The film garnered rave reviews from press, becoming one of the most written about movies of 1980. Perceived as shocking and outrageous, the film captured the essence of the punk scene, and provided a front row seat to the mosh pits, violence, humor and anti-establishment view of the world, as well as unparalleled access to some of the most influential and innovative musicians and groups of all time, including X, CIRCLE JERKS, BLACK FLAG, FEAR and GERMS. Largely unknown to the mainstream world at the time, many of the punk bands first seen here have become legendary.

Legendary moments from the film include Ozzy Osbourne's straight talk about the pitfalls of the industry while he struggles to pour orange juice into a glass, an outspoken Chris Holmes of W.A.S.P. lounges in a pool and pours bottles of vodka on his head, a comparison of outlandish groupie stories, and LONDON setting a soviet flag on fire, all contrasted by a down-to-earth Lemmy offering some sage insight into the decadent rock lifestyle.

Vogue crowned Spheeris the Margaret Mead of headbangers, adding that the film works best "when these purveyors of white noise are dragged offstage and separated from their codpieces." She was able to get to the heart of the musicians themselves, exposing what drives them with uncensored honesty.

In 1998, the last in the series, "The Decline Of Western Civilization Part III", hit select theaters but was never released in any home video format. A disturbing social commentary on homeless youth who have often left home due to abuse or neglect, the film has themes of alienation and alcoholism.

Spheeris personally financed the film, bringing to the screen the real-life squatter lifestyle and angry rejection of mainstream society two decades after she wrote and directed the cult classic "Suburbia". Sadly, there are plenty of tragic endings in this story, overdoses, a squat fire, and the murder of a kid named Squid, who was thrilled to be included in the film because he thought it might turn his life around.

A fitting last chapter in the "Decline" trilogy, this film includes performances by FINAL CONFLICT, LITMUS GREEN, NAKED AGGRESSION and THE RESISTANCE and won the Freedom Of Expression award at the 1998 Sundance Film Festival. In 1999 Spheeris went on to direct "We Sold Our Souls For Rock 'N' Roll", which premiered at Sundance.

Capturing the zeitgeist of a movement or a time is an all-but-impossible task. And though the three movies in this collection are very different and reflect different times, one of the things they have in common is how adroitly they do exactly that. Compelling, revealing and ultimately moving, "The Decline Of Western Civilization", taken as a whole, is an arresting look at who we were and who we are.

The experience of interfacing with homeless kids for "Decline III" instilled in Spheeris a desire to become a foster parent, and she now has her California state license.

For years the fans have asked why it has taken so long for the three "Decline" films to be available as a collection. Spheeris says there are two major reasons and for both, she apologizes. "First, I was not able (until now) to get 'Decline III' released, without giving up the rights to the first two movies," she said. "Second, I always like to look forward in life, not back."

Spheeris credits her daughter, Anna Fox, for not only encouraging her to get the movies out there for the fans, but also for doing most of the incredibly complex expanse of work that was required. For this, she is eternally grateful to Anna. 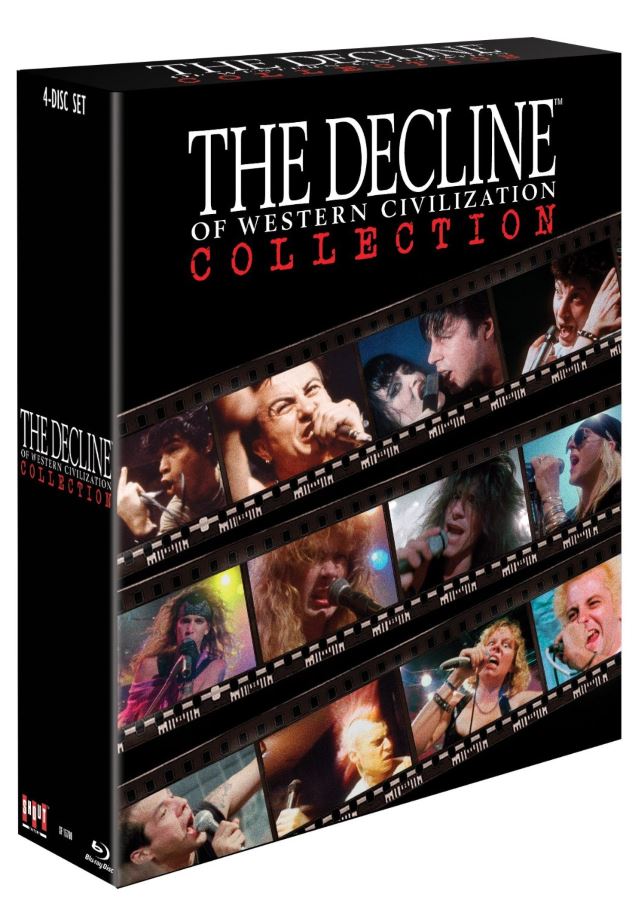