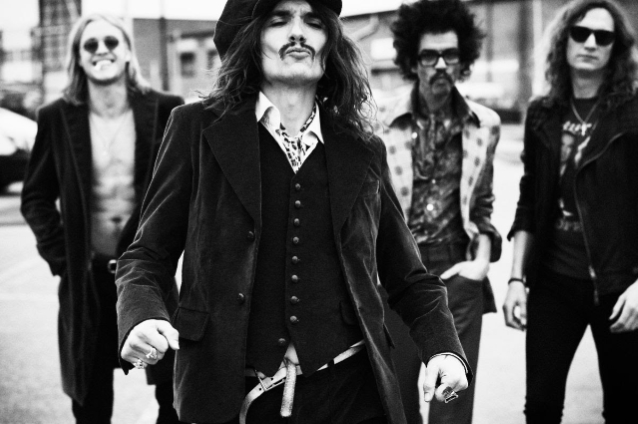 The official lyric video for "Heart Explodes", a brand new song from British rockers THE DARKNESS, can be seen below. The track is taken from the band's upcoming album "Easter Is Cancelled", which will be released on October 4 through Cooking Vinyl.

"Heart Explodes" is an almighty mini-rock opera, which finds THE DARKNESS baring all in a multitude of heartfelt emotions reflecting the hardships, struggles and changing relationships of life.

Frontman Justin Hawkins explains: "It's about the despair of change. Having to reappraise your life and what you're holding on to. It's like that feeling when you just want to go for a swim and keep going. Wanting to be enveloped by something that will gradually pull you down. If you really, really want to survive that process, you can. We've all been there — people who say they haven't are lying."

Guitarist Dan Hawkins adds: "The difference between THE DARKNESS' sadness and other bands' sadness is that we don't wallow in it. Even when it’s sad, there's a playfulness to it."

"Easter Is Cancelled" is the first-ever concept album from THE DARKNESS.

"Easter Is Cancelled" will be released digitally and in full technicolor physical glory as a standard CD, digipak CD with bonus tracks, gatefold LP, limited-edition color vinyl gatefold LP and cassette. The album is available to pre-order now from the band's official store, with special signed copies and exclusive album bundle offers.