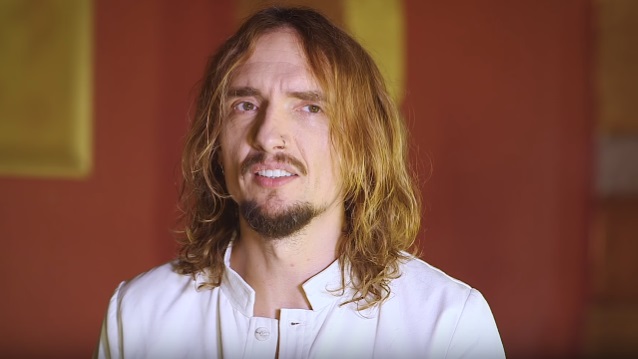 Just in time for World Vegan Month this November — and smack dab in the middle of promoting his band's latest album, "Pinewood Smile" — THE DARKNESS's lead singer and vocal vegan proponent, Justin Hawkins, sat down with PETA at Los Angeles's iconic Fonda Theatre for an exclusive video interview about animal-free eating.

Hawkins credits his wife with educating him about the cruelty inflicted on animals in today's meat, egg, and dairy industries — and he proudly reveals that his entire family has gone vegan. "There's a lot of substitutes that do simulate meat, but there's also some brilliant vegetables that mother nature has invented, so I don't think there are any excuses, really," he says.

PETA — whose motto reads, in part, that "animals are not ours to eat" — notes that in addition to saving more than 100 animals a year from prolonged suffering and a terrifying death, those who go vegan also reduce their risk of suffering from diabetes, heart disease, obesity, and cancer — and a United Nations report revealed that a global transition toward vegan eating is necessary to combat the worst effects of climate change.

Hawkins is part of a long list of celebrities — including Travis Barker, Davey Havok, Paul McCartney, Moby, Rob Zombie, RZA and Jona Weinhofen — who have teamed up with PETA or one of its affiliates to promote healthy and humane vegan meals.