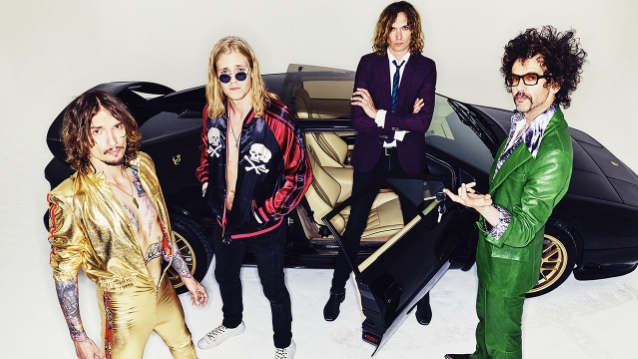 THE DARKNESS frontman Justin Hawkins spoke to Planet Rock about the concept for the cover artwork for the band's upcoming studio album, "Easter Is Cancelled", which is due on October 4 via via Cooking Vinyl. The artwork features what appears to be members of THE DARKNESS beating down Roman guards as Jesus — played by Justin — attempts to escape from the bonds of crucifixion.

He said (see video below): "I'm depicting Christ in the artwork. I'm not suggesting for a minute that I'm Jesus. And the concept is multiverse theory. So, presumably, if we're allowed to talk about multiverse theory, as science folk, which we are, the idea of multiverse theory is that every eventuality that is possible to imagine exists somewhere in an alternate reality — like Schrödinger's cat times infinity. So, the idea is what happens if on the day that the Christ was to be crucified, he just said, 'Well, I'm gonna use my supernatural, wine-turning, water-walking abilities to fight back.' And the crucifixion doesn't happen, the Romans don't stand a chance — one of them is beheaded — and Jesus and three of the Marys, we're saying what if there's a universe like that? Imagine everything goes wrong. Isn't it comforting to know that in a universe somewhere, everything has gone right? Don't you find that comforting?"

"Easter Is Cancelled" will be released digitally and in full technicolor physical glory as a standard CD, digipak CD with bonus tracks, gatefold LP, limited-edition color vinyl gatefold LP and cassette. The album is available to pre-order now from the band's official store with special signed copies and exclusive album bundle offers.

"Easter Is Cancelled" is the follow-up to 2017's "Pinewood Smile", which was the third album since THE DARKNESS's 2011 reunion.

THE DARKNESS burst on to the scene with its multi-platinum 2003 debut album, "Permission To Land".

Having initially split up in 2006, following the departure of Justin Hawkins, THE DARKNESS decided to get back together five years later and released the comeback album "Hot Cakes". This was followed by two further LPs, "Last Of Our Kind" and the aforementioned "Pinewood Smile".