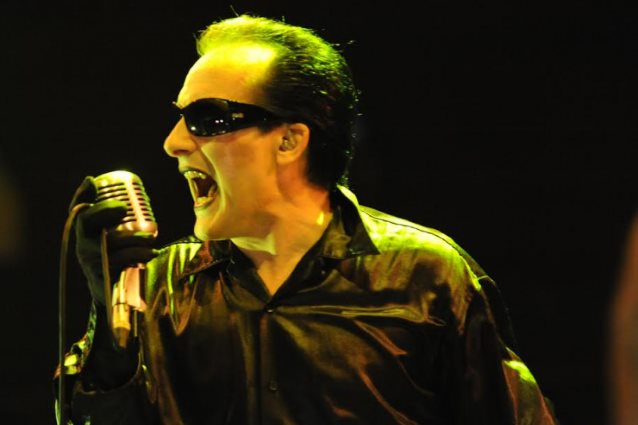 Legendary punk band THE DAMNED will enter the studio in October to record its eleventh album for an early 2018 release via Search & Destroy. Helming the record in Brooklyn, New York will be famed producer Tony Visconti, who has previously worked with David Bowie, T.REX, Morrisey, U2, THE STRANGLERS, Iggy Pop and THIN LIZZY. Engineering the album will be four-time Grammy-winning producer, engineer and mixer Kevin Kline, who has also worked with Bowie and has spent the last several decades compiling an impressive list of credentials featuring top pop artists Peter Gabriel, Elvis Costello, Burt Bacharach, Bryan Ferry and Brandon Flowers.

Says THE DAMNED: "We want to do the unexpected. We've never been predictable, and, well, neither has Tony. There will be a measure of experimentation and we know he'll do his best to artistically challenge us. He's been at the top of our producer list since we first started thinking about recording the album, [and it's a] dream come true he's on board!"

THE DAMNED's as-yet-untitled new album will be the band's first for nearly ten years and is the follow-up to 2008's "So, Who's Paranoid?"

This news also comes with a change in THE DAMNED's lineup. The band has parted ways with bassist Stu West and has replaced him with Paul Gray, who was an essential part of THE DAMNED during the '80s, having played on previous DAMNED albums "The Black Album" and "Strawberries". Gray will be joining THE DAMNED in the studio this fall.

"We had a great time with Stu on this long journey," THE DAMNED says. "We have infinite respect for him and are forever grateful for his contributions to THE DAMNED. As a result of this mutual understanding, we respect his decision, support him wholeheartedly and wish him the best of luck and success."

A dizzying mix of dedication, creativity and stubborn will continues to fuel Dave Vanian, Captain Sensible, Monty Oxymoron and Andrew "Pinch" Pinching. While THE DAMNED's forty-year journey has been challenging, rewarding and shocking at best, they continue to reign as punk's original connoisseurs and feel very positive about what lies ahead in the future. That evidence will be heard on their new album and in venues worldwide as the blitz continues on their "Evil Spirits" tour, set to rock intimate venues throughout the U.K. in January.