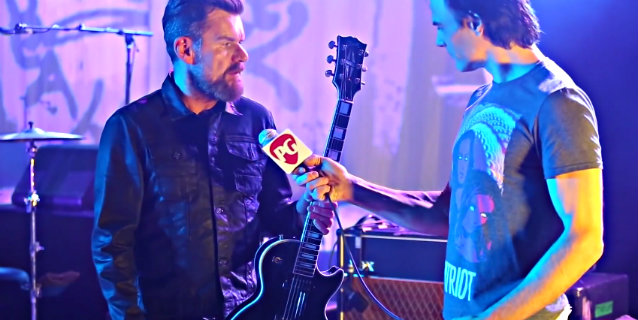 Premier Guitar's John Bohlinger met with THE CULT's Billy Duffy before the band's December 15 show at Minglewood Hall in Memphis, Tennessee. In the 20-minute clip below, Duffy explains the "not very deep mysteries" of a triple-amp rig powered by his signature Gretsch Falcons, custom Gibson Les Pauls, and a bevy of mostly mainstream pedals.

According to The Pulse Of Radio, THE CULT are ready to wrap up a five-month world-tour and they're already planning their next move. The band's frontman, Ian Astbury, told RollingStone.com: "We're playing around with the idea of putting new music out as capsules. That means we'd release two new songs every three months grouped with a live recording of songs from our catalog plus visual elements. We'd do it in all formats: vinyl, digital downloads, CDs…Everything available. It'll be dropped for a limited time in a quick strike and then it's gone."

The problem with the band's plan is that they owe an album to U.K. indie label Cooking Vinyl. Astbury explained, "They aren't interested in the capsule idea. They want to put CDs on shelves. I'm like, 'What shelves?' Even the shelf space at Best Buy is shrinking; I was in Whole Foods the other day and they were selling vinyl… But I'm amazed at the resistance to my idea. We've even tried the self-funding route, but when you're pioneering something you constantly have to go around and educate people about what this is. This a fresh perspective. The old way just isn't working."

He added, "Something is going to come out in 2014 or 2015. We haven't locked in a producer and right now we're going to let the music dictate where we go. We're not tied into breaking onto the Billboard Hot 100 and getting on television and all that stuff."