One of punk and hardcore's most brutal acts, Atlanta, Georgia's THE CHARIOT was interviewed by HardcoreSounds.net when the band played Helsinki, Finland's Semifinal on March 29, 2009. Watch the chat in two parts below.

THE CHARIOT will release its third full-length album, entitled "Wars and Rumors of Wars", on May 5 via Solid State Records. The follow-up to 2007's "The Fiancée" is decribed in a press release as the band's "hardest, dirtiest, and most prolific [effort] to date."

THE CHARIOT recently sat down and hand-packaged 25,000 copies of its new album, to be sold in retail outlets nationwide, serving as something completely unique and original for the band's fans around the country.

THE CHARIOT's second full length album, "The Fiancée", came out in April 2007. 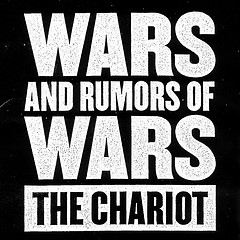