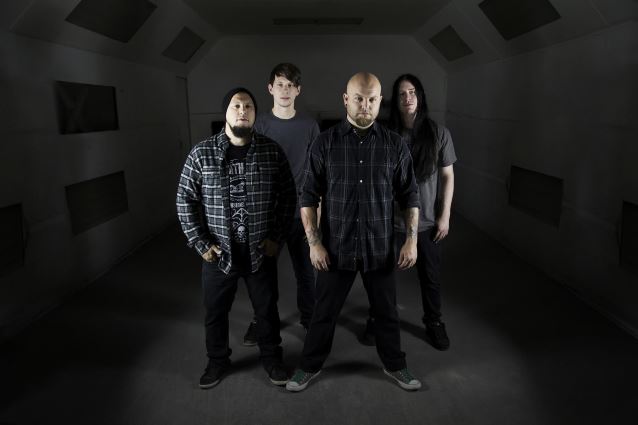 To celebrate the launch of its new web site, the Chicago-based metal band THE BLOODLINE, which features former members of DIRGE WITHIN and DIVINE HERESY, is offering a rare free download of the acoustic version of the track "Bedside Sorrow". Check it out at www.thebloodlinemusic.net.

THE BLOODLINE is currently writing material for its sophomore album. Guitarist Shaun Glass recently said: "So far I would say the songs have a tad more diversity in the songs and focus on big grooves and huge melodies. One new song, 'Awakening', is definitely gonna be a fan fave, I would bet."

THE BLOODLINE's debut album, "We Are One", was released in May 2015 via Another Century. The CD was recorded in 2014 with producer Joel Wanasek (RIGHTEOUS VENDETTA, VINYL THEATRE).

Regarding THE BLOODLINE's formation, singer Travis Neal told the National Rock Review: "The history of the band basically came from we were all in a band together called DIRGE WITHIN. I joined the band late in the band's career. We played a handful of shows as DIRGE, and, you know, they had a record that was out. [It] cycled for a while, so they wanted to write and start getting on a new record. So we set out to write the new record. Just slowly, we all decided that the more the music came out, the more we realized it wasn't DIRGE WITHIN at all; it was a new band. You know, DIRGE had some history behind and stuff like that. So we just kind of decided to kill the band name and start fresh — start over again with a fresh slate and a whole new brand. It's kind of a bold move for a band that's already established and has a following and tours under their belt as well as two national releases. We just felt the band wasn't the same band anymore and we needed to move forward."

Travis described THE BLOODLINE's sound as "basically a heavy active rock band. We have rock and metal tinges in our music. But overall, I would say this genre is coined active rock. We definitely keep our roots as heavy musicians. We add it in there. I guess especially with the vocals, the screams and stuff like that; I try to add them in as accents."