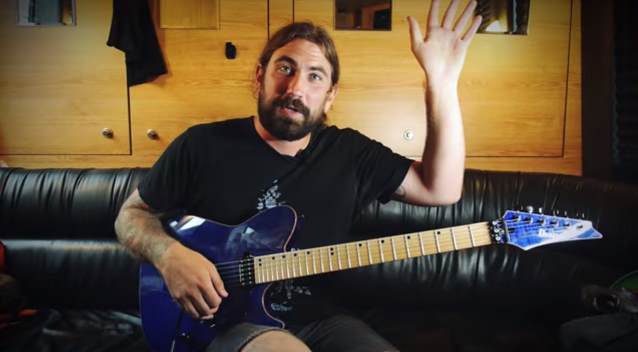 Guitar Messenger recently conducted an interview with guitarist Ryan Knight of Michigan's unstoppable sons of molten melodic death metal THE BLACK DAHLIA MURDER. You can now watch the chat in two parts below.

Asked how his role in the band changed over the years, since he first got into the band in 2009 and up until now, Ryan said: "When I first joined in '09, most of 'Deflorate' had already been written. So I came in pretty much as just a lead guitar player, to handle all the leads and I ended up writing a couple of tracks on it. When we got to 'Ritual', that was when I got to write more and when me and Brian pretty much took that album split all the writing — so he kind of wrote half of it and I wrote half of it. And then 'Everblack' has been kind of the same way. Basically since 'Deflorate', I feel I've been able to implement a little bit more of my style, both with writing and lead-wise, I guess. I think every album gets better, for me, at least — like I feel a little bit more comfortable, you know?"

Knight also spoke about some of his key influences that make up his lead-guitar-playing sound. "I think the key guys… I'm not saying I sound like Eric Johnson; I don't really think I take that much influence from him, but Eric Johnson was really one of the first guys that just really showed me the level that you can play guitar at," he said. "From then on, Michael Romeo from SYMPHONY X is a really [great influence], Richie Kotzen is a huge one, Emil Werstler… I've known Emil for like 10 years. I think we met each other when we were like 19 and ever since I've met that guy, he's always been incredible to me. Per Nilsson; I think I discovered his playing in like 2006 and he's like one of those guys … I don't really think my playing sounds much like his, but I just like it a lot. He's really awesome. I like Brent Mason a lot, I like Jimmy Herring a lot. This guy Guthrie Trapp, he's like a Nashville session guy. I just discovered him about a year, year and a half ago. He's really, really awesome. That's kind of like some of the old people and some of the new people that I'm really into… and Yngwie [Malmsteen], of course, Jason Becker, Marty Friedman, Greg Howe…"

THE BLACK DAHLIA MURDER will release their brand new DVD on May 27. "Fool 'Em All" is the band's second DVD and follows up their immensely popular "Majesty". Once again, director Robbie Tassaro captured the band on tour for another installment of absurdity and hilarity! This time around, put on your 3D glasses (included in the package!) to experience the band in stereoscopic 3D in select scenes throughout the DVD.

THE BLACK DAHLIA MURDER's previous DVD, "Majesty", reached No. 2 on the Billboard Top Music Videos chart and No. 5 in Canada. The DVD would later be certified gold in Canada.

THE BLACK DAHLIA MURDER just wrapped up the Decibel Magazine Tour with CARCASS, GORGUTS and NOISEM. In June, the band will return to Europe for club shows and festival appearances, including Hellfest, Download and Graspop.

THE BLACK DAHLIA MURDER's sixth full-length album, "Everblack", sold 13,000 copies in the United States in its first week of release to land at position No. 32 on The Billboard 200 chart.