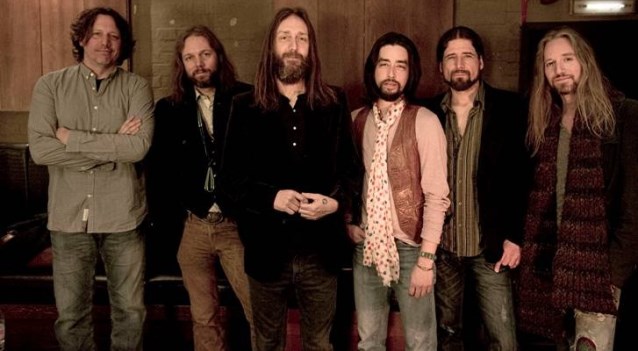 Formed in 1989 in Marietta, Georgia by brothers Chris and Rich Robinson while still in high school, and originally named MR. CROWE'S GARDEN after a children's book, THE BLACK CROWES recorded a total of eight studio albums, starting with 1990's "Shake Your Money Maker", which was released by Rick Rubin's Def American label. That debut, named after a classic Elmore James blues song, peaked at #4 on The Billboard 200, selling more than 5 million copies worldwide (and 3 million in the U.S.), with two singles, "Hard To Handle" and the acoustic ballad "She Talks To Angels", going Top 30 on the Billboard 100 and #1 on the Mainstream Rock Tracks chart, with three more, "Jealous Again", "Twice As Hard" and "Seeing Things", also charting. The group went on to sell 30 million albums internationally, being named "Best New American Band" by Rolling Stone readers in 1990.

"Shake Your Money Maker" will now be released by American Recordings/Universal Music Enterprises (UMe) December 4 as a one-album set, along with the band's following three releases as double-LP sets — 1992's "The Southern Harmony And Musical Companion", 1994's "Amorica" and 1996's "Three Snakes And One Charm" — all on high-grade 180-gram vinyl, with lacquers cut directly from the master tapes. The first two originally came out on Def American, the latter two after Rubin changed the name of the label to American Recordings.

"Shake Your Money Maker": The band's debut album featured two Top 30 Billboard singles in their cover of Otis Redding's "Hard to Handle" and the acoustic ballad "She Talks to Angels". Recorded in the summer of 1989 in Atlanta and Los Angeles with producer George Drakoulias, the album featured ALLMAN BROTHERS keyboardist Chuck Leavell. Several of the songs, including "Could I've Been So Blind" and "She Talks To Angels", whose riffs were originally penned by Rich Robinson when he was 17, come from the band's incarnation as MR. CROWE'S GARDEN. Critics compared them to THE ROLLING STONES, AEROSMITH and THE FACES.

"The Southern Harmony And Musical Companion": THE BLACK CROWES' sophomore album, which went to #1 on the Billboard 200 upon its release in May, 1992, eventually going double-platinum, will be released for the first time as a two-disc 180 gram vinyl set. It was previously released as a single LP in 2004 only in certain countries and only appeared in the U.S. in 2009 by way of an inferior quality third-party pressing. Now remastered for vinyl, the album was the first to feature Marc Ford on lead guitar, replacing Jeff Cease. The title comes from the full name of an influential hymnal compiled by William Walker in 1835. The four released singles each topped the Billboard Album Rock Tracks charts, including "Remedy" (11 weeks), "Thorn in My Pride" (four weeks), "Sting Me" (two weeks) and "Hotel Illness" (six weeks), breaking a record previously held by Tom Petty. The disc also includes the band's cover of Bob Marley's "Time Will Tell". Guitar World named it to the magazine's list of the 100 greatest guitar albums of all time.

"Amorica": The first BLACK CROWES album to come out on Rubin's newly renamed American Recordings label, the two-disc 180-gram vinyl reissue has been out of print in LP form since its initial 1994 release as a single album. The band, now a six-piece, had previously ditched the unreleased "Tall", and its subsequent release caused plenty of controversy in the marketplace, with several retailers refusing to carry the album, whose original cover (later airbrushed) depicted female pubic hair visible under an American flag bikini. The original release eventually earned RIAA-certified gold for selling more than 500,000, peaking at #11 on The Billboard 200, spurred by three more Top 10 Mainstream Rock Tracks in "A Conspiracy" (#5, #23 Modern Rock Tracks ), "High Head Blues" (#8) and "Wiser Time" (#7).

"Three Snakes And One Charm": THE BLACK CROWES' fourth album, also on American Recordings, was previously available on vinyl only as a boxed set of 7" singles, but now comes out for the first time as a two-LP set on 180-gram vinyl since its initial CD release in July, 1996. The original album peaked at #15 on The Billboard 200, with its two singles, "Blackberry" and "Good Friday", reaching #6 and #3, respectively, on the magazine's Mainstream Rock Tracks chart. Produced by the band with Jack Joseph Puig — who also manned the boards for "Amorica" — the album was recorded in a rented home, which helped soothe the frayed relationship between the brothers Robinson, then finished at Ocean Way Studios in Los Angeles. The new production touches included the DIRTY DOZEN BRASS BAND on tracks like "(Only Halfway) to Everywhere" and "Let Me Share The Ride". Two bonus tracks, originally included in the boxed set, "Just Say You're Sorry" and a cover of Bob Marley's "Pimper's Paradise", are included on the fourth and final side of the double-vinyl set.