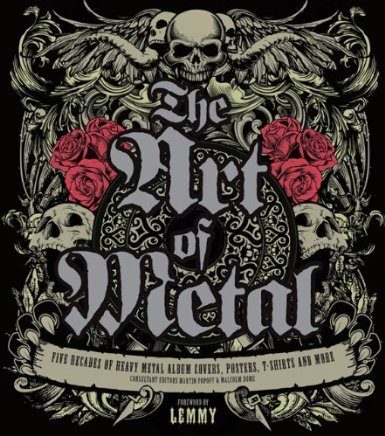 Few genres of music have been more entwined with the imagery that the music invokes more than heavy metal. Since the late 1960s, the imagery of the heavy metal genre has been closely connected with the music itself. Classic albums evoke memories of famous cover artwork; metal bands have become forever synonymous with their iconic logos; and landmark live shows have led to instantly recognizable gig posters that embody the time, place, and passion of the events. It's even possible to trace the genre's evolution by examining a continuum of its art.

In "The Art Of Metal: Five Decades Of Heavy Metal Album Covers, Posters, T-Shirts, And More", renowned music journalists Malcolm Dome and Martin Popoff offer a beautifully presented chronological collection of the colorful, outlandish, and sophisticated album covers, posters, T-shirts, and more that span decades of heavy metal music. More than 400 gorgeously reproduced works of art are complemented by in-depth features, including quotes from the graphic artists and musicians responsible for them. Dome also spotlights the metal genre's most influential artists and photographers and delves into other topics that include metal merch, magazines, fashion, and tattoos. In the process, "The Art Of Metal" illustrates and explores the close-knit relationship between those timeless riffs that thunder from Marshall stacks and the images that have come to represent the songs, anthems, and sheer nature of headbanger culture-a must for any true thrasher's bookshelf.

"The Art Of Metal: Five Decades Of Heavy Metal Album Covers, Posters, T-Shirts, And More" will be released on October 15 via Voyageur Press.

Malcolm Dome started writing about music, and metal in particular, for Record Mirror in 1979. He was part of the Kerrang! team in the 1980s, cofounded RAW magazine in 1988, and now writes for Metal Hammer, Prog and Classic Rock, among others. Dome has also authored a number of books, including "Encyclopedia Metallica" (from which a certain band got its name), and histories of VAN HALEN, AEROSMITH, and AC/DC. He has presented his own radio shows for TotalRock and has appeared in a number of documentaries, including the award-winning "Anvil: The Story Of Anvil".

Martin Popoff has been described as the world's most famous heavy metal journalist. He has penned more than 40 books on hard rock, heavy metal, and record collecting, including Voyageur Press' "Rush: The Illustrated History". He has also worked in film and television, his most recent projects being "Rush: Beyond The Lighted Stage" and VH1's "Metal Evolution". He lives in Toronto with his wife and son.