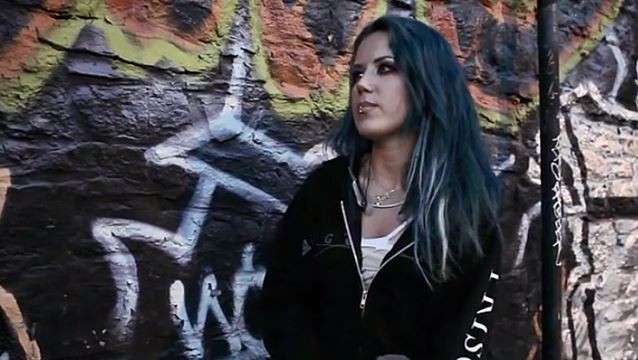 Mark Holmes of Metal Discovery conducted an interview with singer Alissa White-Gluz of Montreal, Quebec, Canada-based female-fronted melodic death metallers THE AGONIST before the band's October 21 concert at The Kazimier in Liverpool, U.K. A couple of excerpts from the chat follow below.

Metal Discovery: I gather you've been writing for the fourth album between tours?

Metal Discovery: How's the new album shaping up and can we expect more wild innovation from THE AGONIST?

Alissa: In my opinion, it's the best ever. Like, I'm really happy about this new music, I think it's gonna be awesome.

Metal Discovery: How far are you into the writing now?

Alissa: Very preliminary. Just some instrumental tracks, but nothing concrete yet.

Metal Discovery: Do you have studio time booked already; are you writing to a deadline?

Alissa: With THE AGONIST, we've always kind of just been putting our music first and foremost, and not really caring too much about deadlines and stuff like that. So we just kinda do it when we're ready.

Metal Discovery: Your songs are always lyrically provocative, but is it about airing your concerns on whatever issue you're writing and singing about, or is it your aim and hope that some people are actually provoked into thinking more about those issues and changing their opinions?

Alissa: I think I definitely like to provoke. I'm very carefully delineating that provoking and persuading are two different things. I never want to persuade anyone of anything, but I would like to provoke people to think and make their own decisions on certain subjects. So, I mean, when I write songs, I write them for the music and for me. I don't write them thinking, maybe this word's gonna make somebody think about this but, I think, more than understanding the lyrics, people just get a general sense, overall, after listening to a song and that's cool.

Metal Discovery: Somebody I interviewed recently was talking about the '70s and early '80s being a phenomenal era of songwriting, lyrics-wise, because people were more concerned about the world they lived in but, now, everything's more solipsistic and what becomes popular in music is people moaning on about themselves. Do you think that's an inherent problem with contemporary society where global concerns have become more marginalised in popular culture and, generally, in people's lives?

Alissa: Yeah. I mean, it's cool to write songs about yourself too because everyone can listen to that and relate to it. But I think that, although the world is becoming a global village because of technology, it's also that everyone's becoming a lot more introverted, just because everyone has their Facebook page and their Twitter account and their own little universe where they're the centre of it, and they don't necessarily care about anything else that's going on because, to them, they're the master of that. And, of course, those things mean nothing in the real sense of the world. But they mean a lot to somebody who lives in that world and a lot of young people, I think, live in that world.

Metal Discovery: That's definitely true. Hypothetically, if you could transform any ugliness, malice or corruption in the world into something beautiful right now, what would it be?

Alissa: I wish that people would just favour selflessness over selfishness. If people would just stop and think, like, "Hey, I want to eat a hamburger or I could eat a veggie burger and it's not going to hurt anyone or anything to eat the veggie burger and it tastes just as good." All they would have to do is go a little bit outside of the comfort zone and try something new and then they would be, effectively, acting in a selfless way because they're giving up something that maybe they really like — not making a huge sacrifice but actually making a big difference. Or if somebody wants, even on a small scale, if somebody really wants to get something for themselves but, instead, they choose to get something that they can share with other people… especially on tour because you meet so many people every day, little things like that make such a big difference, just to brighten everyone's day. And little actions like as simple as something you consume or wear or do, if you can just make that have less of an impact on everyone else then it's huge. And, so, I think if everyone could just adjust themselves a little bit more towards that, then that would make a big difference.