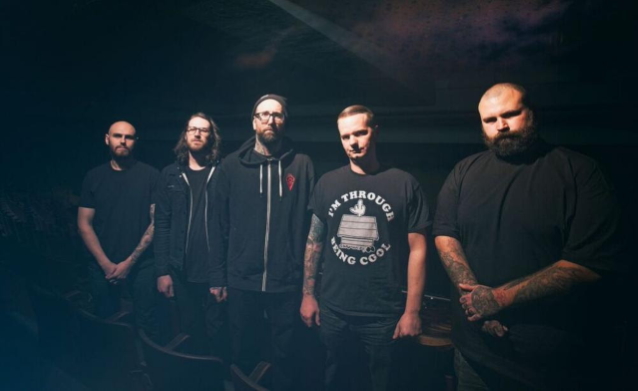 THE ACACIA STRAIN has released a new album titled "It Comes In Waves". The effort is now available for streaming, download or purchase via Closed Casket Activites. The follow-up to 2017's "Gravebloom" was recorded in the spring of 2019 and was mixed and mastered by Steve Seid of Graphic Nature Audio. The cover art was created by MFAXII.

THE ACACIA STRAIN vocalist Vincent Bennett told Decibel about "It Comes In Waves": "It's one of those things that we just wanted to do for a very long time and hadn’t really had the means to do it. We're usually putting out full-lengths and doing normal ACACIA STRAIN things. A record every two years and there's no room for anything that isn't 'typical' of us, so this is a fun extra thing we got to do because of my relationship with Justin from Closed Casket. The lineup that we have now is so open-minded and diverse that we wanted to do something that was kind of off what we would usually do."

Asked if "It Comes In Waves" is a concept record, Vincent said: "Absolutely. The main concept is that humans have believed in deities and gods and angels and demons and all of these otherworldly, infallible beings since the beginning of humanity. They all, throughout cultures, throughout time, throughout everything, they all have commonalities, they all have this feeling of leadership, of manipulation, of humans always follow whatever these deities say and they're known to be all-knowing, all-powerful and, like I said before, infallible. The concept of this album is although all of these cultures have different gods, what if it's all the same 'gods' that have been, throughout history, manipulating and shaping humanity? I'm not saying they're aliens, but I'm saying they're inter-dimensional beings that have a personality and have kind of just been manipulating humanity since the beginning. They've been around forever. We haven't, and they saw us as an opportunity to have a little fun. That's basically what the album is about. It's about this idea of gods actually being not only real but also physical beings that are just having their way with us at our expense, just so they can have something to do."

"It Comes In Waves" track listing: