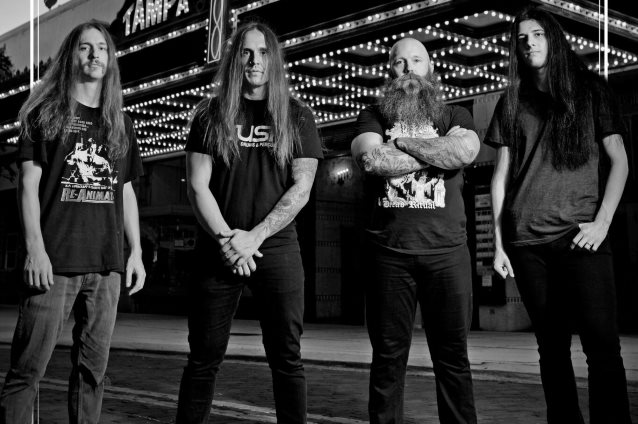 Reactivated Florida metal outfit THE ABSENCE has signed a deal with M-Theory Audio. The band's new album will be released in early 2018.

THE ABSENCE came onto the scene in 2005 with its crushing Metal Blade debut, "From Your Grave". The album, and its two follow-up releases, 2007's "Riders Of The Plague" and 2010's "Enemy Unbound", showcased the perfect mixture of heart-wrenching melodies and skull-pounding aggression truly making them one of the premiere bands of the melodic death metal scene. THE ABSENCE further cemented its reputation via several tours supporting some of the biggest names in metal. And then they seemingly disappeared.

As a result of setbacks in personnel and, for some bandmembers, a desire to explore new terrain by recording and performing with additional groups or working in related fields producing or handling live sound/tour managing for others, THE ABSENCE was put on hold waiting for the right time to return. Last year, the revamped band — consisting of singer Jamie Stewart, drummer Jeramie Kling and bassist Mike Leon, along with the addition of celebrated guitar duo Joey Concepcion (JASTA, ARMAGEDDON) and Taylor Nordberg (SOILWORK, RIBSPREADER) — teased fans with the face-melting "Septic Testament". The reaction was phenomenal and motivated the band members to continue writing and recording the epic return and be absent from the scene no more.

M-Theory Audio is headed by former Century Media president Marco Barbieri and includes with a team of friends and seasoned pros who have worked with labels like Victory, Prosthetic and Epitaph.

"We as a unit could not be happier to sign a deal with such an amazing group of hardworking people," states Kling. "Marco and the crew over at M-Theory are the future of record labels!"

"I am thrilled to sign THE ABSENCE to M-Theory Audio and continue this next chapter," declares Marco. "I've followed THE ABSENCE as a fan since the beginning and always thought they were one of the better new bands. I love their mix of rapid-fire hostility and ear-pleasing guitar work."