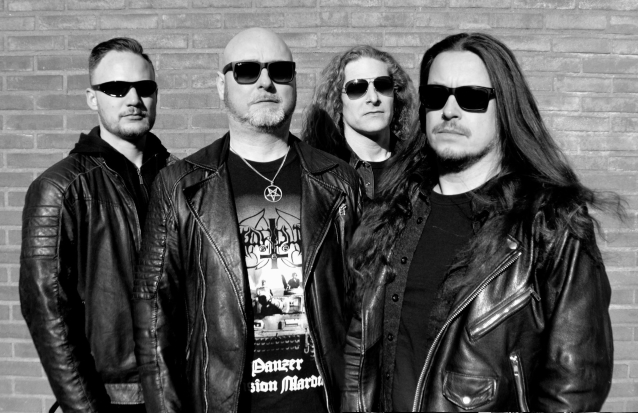 Dutch death metal veterans THANATOS have inked a deal with Listenable Records. The band is currently working on material for the follow-up to 2014's "Global Purification" album for an early 2020 release.

THANATOS, Holland's first-ever death/thrash metal band, has become an illustrious name that has been haunting the underground metal scene for decades and is now celebrating its 35th anniversary in 2019.

The band has always maintained a consistent quality over its entire catalog with its authentic brand of unrelenting death thrash metal — staying true to its initial merciless madness, faithfully unleashing frenetic hooks, crushing straight forward dynamics and original visceral brutality wrapped up in a massive production as the main killing components.

Guitarist/vocalist Stephan Gebédi comments: "When THANATOS emerged in 1984, metal was still raw and unpolished and there was a strong 'us against the world' feeling amongst both bands and fans. We were at war with the establishment, organized religion and mainstream music. The current metal scene has lost a lot of its rough edges. A lot of bands have adopted a polished, plastic sound and a somewhat pleasant, politically correct attitude. Thank god, or rather Satan, for bands that still choose to go against the grain,stir up some controversy and never let go of the original feeling."