"I just wanted to mention some things going on with the band and get some opinions from some of you.

"Many of you already know that TMA has signed with Philip Anselmo's [DOWN, PANTERA] label Housecore Records. Philip plans to release a Housecore compilation CD first with the bands he is signing. So he wants to put two TMA songs on the compilation. Then they will release a full-length TMA CD in 2009.

"Anyway, a couple of our members want to change the name of our band for various reasons. I like the name myself, but I have had a few occasions when I was out doing shows with RIGOR MORTIS in other cities and would tell people about my new band. I would say we are called TEXAS METAL ALLIANCE and they would say… 'Oh, I have seen that on MySpace bulletins and I thought it was some kind of Texas metal support group… I didn't even know it was an actual band.' On the other hand I know how much it sucks changing the name of a band. So many people already know the name and it takes a long time to get people aware of the new name. You have to do the 'formerly TMA' thing for so long… it can be a pain in the ass. I always thought that after our CD came out that more people out of our area would get used to calling us TMA instead of TEXAS METAL ALLIANCE. Sort of like SOD, MOD, DRI etc. It is already that was for people in Dallas/Fort Worth that are already familiar with our band.

"So I am curious as to what some of you think about the name TEXAS METAL ALLIANCE. Should we change it or keep it?

"In other news… We are psyched about some of our upcoming shows with bands like GOATWHORE, DEVASTATION, MILITIA, OVERKILL, KRISIUN and ANIMOSITY. GOATWHORE will be playing their only show of the year (besides Ozzfest) at Ridglea Theater on Nov 21. I am gonna drag Sammy up on stage with me to help sing some RIGOR MORTIS. We also are doing some shows with reunited Texas thrash bands DEVASTATION and MILITIA in December. Then in January we get the honor of going to Mexico for a couple of shows to open for OVERKILL, KRISIUN and ANIMOSITY." 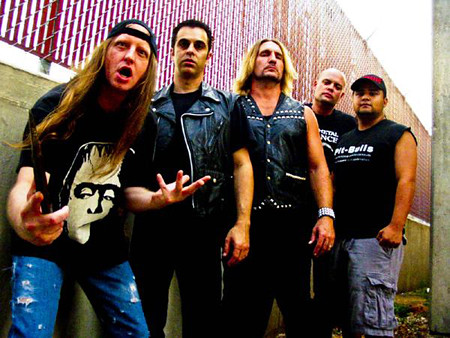