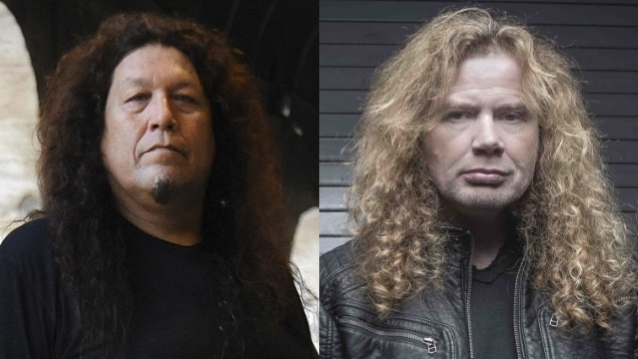 TESTAMENT's Chuck Billy says that Dave Mustaine is "ready for the battle" after recently being diagnosed with throat cancer.

Billy, himself a survivor of cancer, commented on Mustaine's health issues during a press conference at this past weekend's Hellfest in Clisson, France.

The singer said: "Well, it's always a hard reaction when you have friends or anybody, for that matter, who is told that. I feel bad for Dave because I know the feeling when the doctor tells you of the illness. You're, like, 'Woah.' Your feet are just taken out from under you. And you don't know the outcome.

Chuck, whose band is scheduled to perform on the MEGADETH-curated Megacruise in October, continued: "When I first found out, I wrote Dave and Dave Ellefson [MEGADETH bassist] and wished them the best, and let 'em know if there's anything we can do… We have the Megacruise coming up, and right away, we decided, well, if we have to play all MEGADETH songs for the fans, we'll be here, we'll learn 'em, we're ready to do that. And they really appreciated the gesture.

"I know Dave. He's ready for the battle. And it sucks to be told that. So I feel bad for his children and his family.

"The 'C' word is a bad word, not matter if [the success rate is] 95 percent or five percent. It's awful just to put your family [through that]. It's hard for your family to face that."

In 2001, doctors found a tumor in Chuck's chest cavity putting pressure on his heart. Billy spent the next two years receiving treatment for cancer, and won. That battle helped bring his former bandmates back together, and TESTAMENT was resurrected, releasing three new albums, including 2016's "Brotherhood Of The Snake".