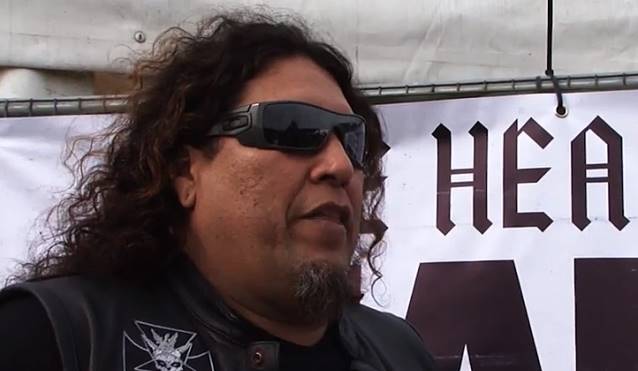 Australia's Rockersphere recently conducted an interview with vocalist Chuck Billy of San Francisco Bay Area metallers TESTAMENT. You can now listen to the chat using the SoundCloud widget below.

"Dark Roots Of Thrash", a DVD/2CD release documenting TESTAMENT's sold-out headlining performance at the Paramount in Huntington, New York this past February, was made available on October 18 (Europe) and will be released on October 29 (North America) via Nuclear Blast Records. "Dark Roots Of Thrash" was produced by Get Hammered Productions, directed by Tommy Jones (DEATH ANGEL, KATAKLYSM, SOILWORK) and mixed by Juan Urteaga (VILE, EXODUS, SADUS, MACHINE HEAD). It captures a total of 19 live tracks with countless cams onstage and high above the audience, plus a special moshpit cam that makes you feel like you're a part of the show.

TESTAMENT has just hit the road alongside LAMB OF GOD, KILLSWITCH ENGANGE and HUNTRESS.