TESTAMENT vocalist Chuck Billy will join a panel of musicians discussing the cultural roots of music at "Rumble: A Celebration Of Native Music, Film And Culture" the weekend of April 30-May 2.

"Rumble: A Celebration Of Native Music, Film And Culture" revolutionizes how the history of music is seen, as the roots of some of this country’s greatest music, including blues, jazz. folk, pop, rock, heavy metal, are examined.

"I am very proud that Native people are being recognized for their music and creativity," Billy says. "I'm also proud to be representing my Pomo tribe from Northern California."

This New Mexico-based, free nation-wide virtual event features a weekend-long streaming of "Rumble: The Indians Who Rocked the World". From its inception at Sundance to its PBS and theatrical release, it has impacted millions through telling the profound, essential, and until now, missing chapter in the history of American music: the indigenous influence on our nation's most legendary music makers.

Attendees have an opportunity to meet the movers and shakers behind this story, from the filmmakers to leading performers in conversations as well as specially recorded performances.

There will also be exclusive recorded performances by Native American musicians, including PJ Vegas, Artson, Kenneth Shirley, Sihasin, Rising Appalachia, Pamyua, Po.10.Cee, Anakaela Trujillo (winner of the 2020 Rising Star Award at the NM Hispano Music Awards) and the San Juan Elementary Dragons, whose music video is a finalist in the 2021 NM Music Awards. Performances will air beginning at 7:30 p.m. EDT/4:30 p.m. PDT. Panels and performances will re-air over the weekend.

"Rumble: A Celebration Of Native Music, Film And Culture" is presented by True Kids 1, a youth media education nonprofit organization based in northern New Mexico. The event will take place April 30 through May 2 from 10 a.m.-12 midnight EDT/7 a.m.-9 p.m. PDT, with "Rumble: The Indians Who Rocked The World" streaming all day.

Visit www.truekids1.org/rumble to register for the weekend celebration. A $10 donation is suggested for registration. 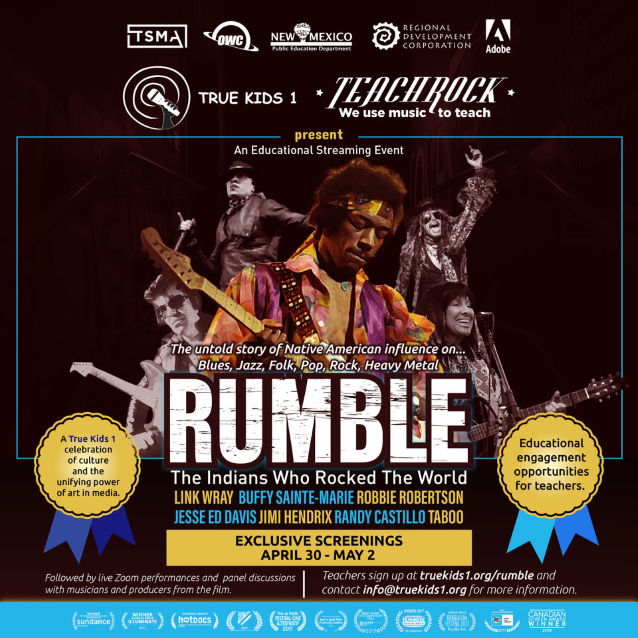