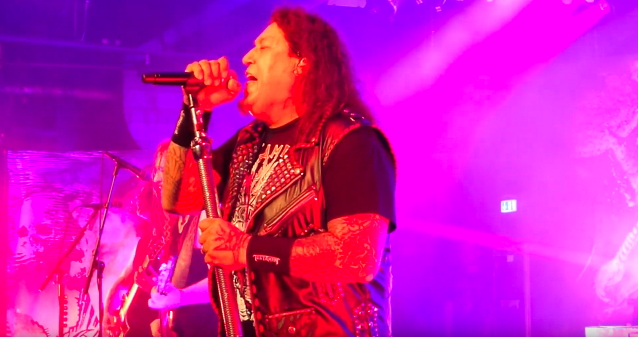 San Francisco Bay Area metallers TESTAMENT performed their new song "Children Of The Next Level" live for the first time last night (Friday, March 6) at the Kentish Town Forum in London England. Fan-filmed video footage of the performance can be seen below.

"Children Of The Next Level" is taken from TESTAMENT's upcoming album, "Titans Of Creation", which will be released on April 3 via Nuclear Blast. The long-awaited follow-up to 2016 album "Brotherhood Of The Snake" was produced by singer Chuck Billy and guitarist Eric Peterson while Juan Urteaga of Trident Studios handled co-producing, recording and engineering. Andy Sneap was responsible for the mixing and mastering of the album. Eliran Kantor stepped up once again to create a new masterpiece of artwork for the cover of this release.

In a recent interview with Heavy New York, Billy was asked if the band's new disc is a musical continuation of "Brotherhood Of The Snake". He responded: "You're always trying to top your last record, and I thought 'Brotherhood', up to that point, was a pretty strong record. This one, it definitely stands on its own — all the songs have their own identity. Eric [Peterson, guitar] somehow came up with a way to make it be TESTAMENT but feel fresh and new still TESTAMENT, so that's pretty awesome."

TESTAMENT has teamed up with EXODUS and DEATH ANGEL for "The Bay Strikes Back 2020" European tour. The trek kicked off on February 6 in Copenhagen, Denmark and is hitting 25 cities before concluding on March 11 in Hannover, Germany.