Brian Tichy, Joe Sutton, Brent Woods, Kelle Rhoads and the Rhoads family, who form the nucleus of the team that organized the "Randy Rhoads Remembered" concert that took place on January 25 during the NAMM convention in Anaheim, California, have decided to give the people more of what they want!

Since receiving stellar reviews and feedback from the press, the fans, and the artists involved, it was agreed to take the "Randy Rhoads Remembered" show a step further… on the road!

Regarding the celebration, Tichy said: "When the opportunity arose to have a mini-tour to pay tribute to Randy, my partner Joe Sutton and I decided to utilize the 'Bonzo Bash' template and celebrate the music and wizardry of one of rock's truly legendary guitar heroes — Randy Rhoads!

"Having grown up at a time when Randy took over the guitar world, he impacted me deeply. It seemed that a show in the 'Bonzo Bash' mold would be perfect to celebrate all things Randy Rhoads.

"With that said, in addition to the superb list of guitarists, I am psyched to announce some more of the world's most brilliant players to 'Randy Rhoads Remembered'."

Phil Demmel (MACHINE HEAD): "Watching Randy at 10 a.m. in the Oakland coliseum was my 1st concert experience and it was life changing. It made me want to not only play guitar, but to perform with passion and emotion.

"I'm beyond honored to be part of this celebration of a true legend and an immense inspiration."

Brian Tichy: "I am so psyched to get this show together!

"Randy's playing, and the music on those two Ozzy records were huge to me.

"I am a drummer, but I also started putting a lot of time into guitar at the same time Randy came out.

"I heard Ozzy being interviewed on the radio when 'Blizzard Of Ozz' was released. They played 'I Don't Know' and when the guitar kicked in, I was floored and I was an instant fan! I spent countless hours trying to learn Randy's songs, riffs and solos while I was also just a beginner on guitar. I tried to learn Randy's live solo note for note! I had Randy's posters on my basement walls! I still have those posters framed in my house right now! Brent Woods and I even shared a bottle of Randy Rhoads wine when it first came out!"

Brent Woods (THE MOBY DICKS, VINCE NEIL): "31 years after the tragic death of my mentor and favorite guitar player, it's time for a proper celebration of Randy's legacy.

Phil X (THE DRILLS, BON JOVI): "After school 1981. Drop the needle. 'Blizzard Of Ozz'. WTF?!?! The guy who took the 6 in the pentatonic scale and made it minor instead of major so that ANYONE who plays it in sequence to this day is reminded of Randy Rhoads. His heart, his soul, his choice of notes. His FIRE. That kind of inspiration stays with you 'till death. And now… 2014. 'Randy Rhoads Remembered'. A bunch of as-inspired awesome musicians paying homage to this amazing guy who contributed SO MUCH to ROCK guitar. I am so excited to be a part of it. I CAN'T [email protected] WAIT!" 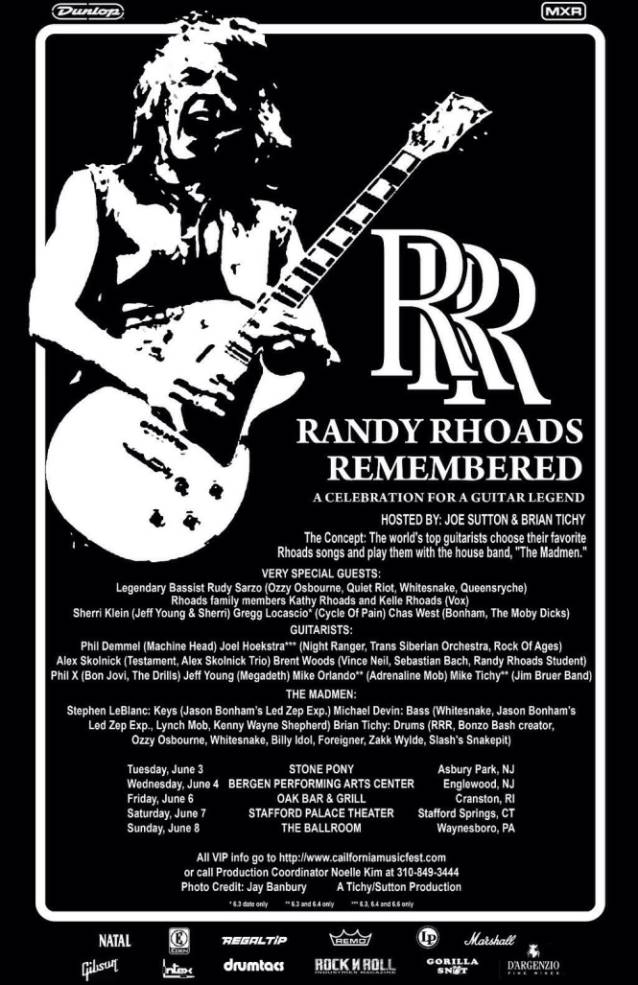