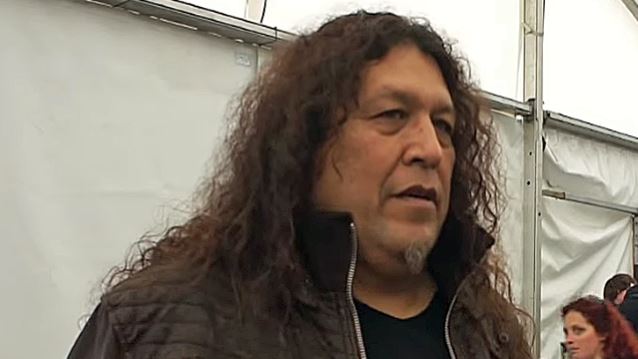 MikeJamesRockShow.com conducted an interview with vocalist Chuck Billy of San Francisco Bay Area thrash metal veterans TESTAMENT at the 2015 edition of the U.K.'s Download festival, which was held this weekend in Donington Park. You can now watch the chat below.

Speaking about the progress of the songwriting sessions for TESTAMENT's follow-up to 2012's "Dark Roots Of Earth", Billy said: "We have about five or six tracks to write left. As soon as we get home [from tour] — we're home next week — we'll jump right into it. We'll be home for a few months."

He continued: "Usually we write and record all in one without any touring. This is the first time we really said, 'Let's take a break. We've got some good offers. Let's go to Europe. [Let's] get away from this.'

"We've been out for ten weeks, so now we’re, like, 'Okay, we go home next week.' We're ready to go home, ready to jump right back into finishing the record…"

Billy added: "Our goal is to have it done by Thanskgiving. And then we're going to South America in November/December with CANNIBAL CORPSE."

Asked if TESTAMENT will release a new full-length album or if there is a chance they will isue an EP instead, Chuck responded: "[A] full album. At first, we said, 'What if…? We've got six [songs already written]. We could do [just release an EP].' But, nah, we'll do an album."

He continued: "I remember reading the NIRVANA book, and I remember back when they would tour, every tour they went and did, they put out new singles. Just singles… 'Here we go. We're going on tour. We've got the new vinyl.' And I thought it was brilliant, because they've always got new promotion, new hype, something new. I thought that was great. There's something to that. I just think, for us… I don't wanna lose focus on getting more songs written. I'd rather just tackle the whole record. 'Okay, here it is. Let's go on tour for a couple of years.'"