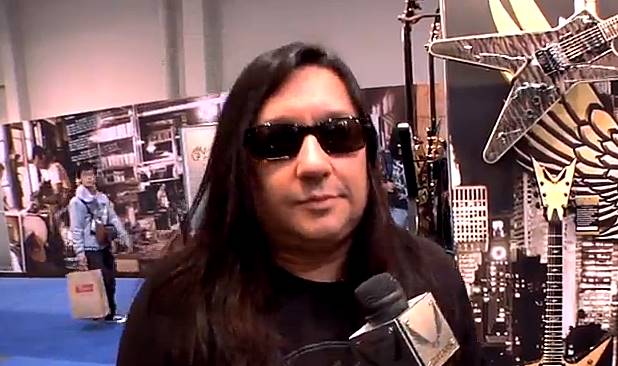 David Devo Oosthuizen of The Metal Review recently conducted an interview with guitarist Eric Peterson of San Francisco Bay Area metal veterans TESTAMENT. A couple of excerpts from the chat follow below.

The Metal Review: I recently read that you will start already writing and recording your eleventh studio album for a 2014 release. What's your plans here so close after the release of "Dark Roots Of Thrash"?

Eric: We will definitely start to work on new material next year. However, how it all pans out and how it all comes together will still have to be seen. We definitely have some ideas. We never want to make a record just to make a record. It has to have vibe and appeal and we have to know what the record will be about. We will need to write some songs to give birth to that. We are doing a couple of tours coming up where we can start thinking about stuff like that. We will be doing the LAMB OF GOD tour October and November. In February next year we will start getting together and start thinking about the new record.

The Metal Review: Recently TRIVIUM's Matt Heafy shared some interesting thoughts on the state of metal in 2013. What is your take on this?

Eric: There seems to be a lot of cool new bands out there, you know, heavy stuff. However, I personally would like to see more diversity. Maybe it is out there and I have just not seen it. I would like to see singers be more distinctive. A lot of heavy metal these days is almost like rap with screaming over it in a death metal kind of style. When I listen to radio stations, I get confused, as all the bands sound the same and there are a lot of them out there. Don't get me wrong, they may be good at what they do, but I just do not think there is much originality in what they do. If you take, for instance, a band like GHOST that sounds completely different; there is true originality there. I am, of course, a big fan and I really like their style. You cannot compare these new bands to, for instance, a band like KREATOR; they are a distinctive band and all the members care deeply for what they are doing.

The Metal Review: In terms of the CD market dying, do you think it has to do with the lack of diversity (bands producing purely for what they hope will sell)? Whereas, on the other hand, the sale of vinyl is growing rapidly again and is being hailed as a comeback. What are your views on this?

Eric: For me, the appeal of vinyl as a fan is not even as much to play it, but just to hold a record, to open it and look at the great artwork in a way in which is supposed to be done. You know, power artwork. I know at my house, my son in particular, half of his music is on the iPod whereas the other half he is listening to in his room on a stereo system on record. He will have all his records spread all over his bed. There is just something cool about that needle on the record.

The Metal Review: What are the chances of a new DRAGONLORD album, given the last release was "Black Wings Of Destiny" back in 2005?

Eric: I am actually recording it as we speak! I just recorded all the drums with a new drummer [Alex Bent]. He is 20 years old from a band called DECREPIT BIRTH. He is from a younger age and different though process, but very much influenced from the classic drummers like Neil Peart. He is breathing new life into DRAGONLORD. I have been writing for the past 6 years, and I feel the time is now right for the new album. I need an outlet and now with the drumming done and the guitars done I'll probably end up completing the record sometime in December.

Read the entire interview at The Metal Review.