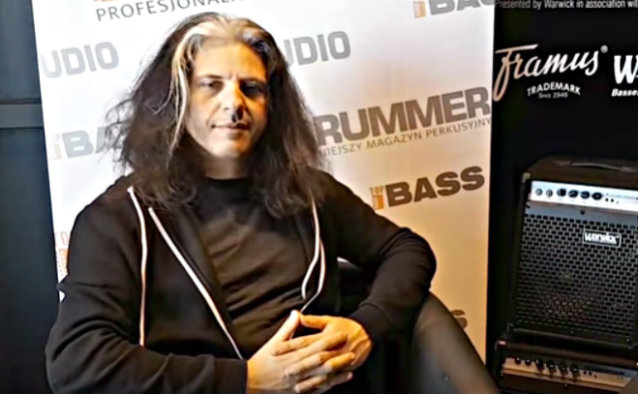 Jakub Milszewski of Poland's TopGuitar conducted an interview with TESTAMENT guitarist Alex Skolnick at this year's Warwick Bass Camp in Markneukirchen, Germany. You can now watch the chat below. A couple of excerpts follow (transcribed by BLABBERMOUTH.NET).

On TESTAMENT's twelfth album, "Brotherhood Of The Snake":

Alex: "I think it's a little more of a riffy album [than the last couple of TESTAMENT records].

"TESTAMENT is a band that sort of can only work on its own schedule, and you never know how that's gonna be.

"We were touring lot over the last couple of years. So I think finally the record just had to get done.

"I sent [TESTAMENT guitarist Eric Peterson and singer Chuck Billy] a bunch of melodic ideas [to incorporate into the new songs]. I think like a classic way we would write — a song like 'Into The Pit', the introduction riff with the harmony, that's me. And then Eric [is [responsible for adding the crunchy, heavy riffs to it]. But then when I wasn't in the band, they did an album called 'The Gathering', which is a great album, and it's more riff-based. There's some single-note stuff, but not quite as much. And I think this record is gonna be more like that. It's more of a riffy thing.

"I think [the fans will be pleased]. I think if you're a fan of the more melodic, harmony stuff, maybe you'll wanna wait for the next record. [Chuckles] But as far as energy and intensity, it's definitely there. And there's some solos that I did that I'm proud of. But, yeah, dynamically, it's a little different than the others."

On whether jazz is a more sophisticated style of music than heavy metal:

Alex: "It's different. I mean, it's easy to say [that], but I think there is some metal that is probably more sophisticated than the overall genre gets credit for. MESHUGGAH, for example, [and] OPETH, for sure. There's definitely some sophisticated [stuff] going on there.

"Once people say the word 'jazz,' it means different things to different people. I tend to think of classic, straight-ahead music, or music that has that aesthetic. I mean, even like the original fusion of the '70s, to me, still has some of the process that the classic jazz has, as far as the ambient improvisation and the dynamics and the song forms. There's a whole commercial element of jazz that I don't relate to at all. If people like it, that's fine. I don't really like it. It's known as smooth jazz, which is more like pop music, and I don't relate to that. And some people call that jazz. So it really depends on what type of music you're talking about. But some of that music, which is really more like instrumental pop, I don't think it's that sophisticated. So, sure, if I'm comparing, say, John Coltrane 'Live At The Village Vanguard', [which is] very sophisticated music, and I might point to MOTÖRHEAD 'No Sleep 'Til Hammersmith', which is awesome; it's great music. But is it sophisticated? But then there's nothing wrong with liking it. I think there's nothing wrong with liking both. I sort of relate to both. And there are musicians out there that like both. I'm a big fan of John Zorn, for example, and that' somebody who cites Charlie Parker as an influence, but also SLAYER and MESHUGGAH."