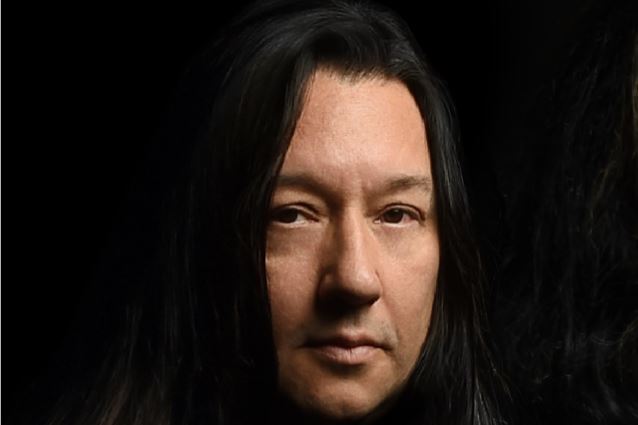 Nik "Captain Catsquid" Coulter of the New Zealand radio show "Cacophony" recently conducted an interview with TESTAMENT guitarist Eric Peterson. You can now listen to the chat using the Mixcloud widget below. A couple of excerpts follow (transcribed by BLABBERMOUTH.NET).

On the recording process for TESTAMENT's twelfth album, "Brotherhood Of The Snake":

Eric: "We've come so far with technology. I mean, in the old days, you'd have to record at a studio and everything is done on a tape and any kind of splicing or dicing or editing, you'd have to cut tapes. Now you've got Pro Tools, you've got Logic, you've got the Internet, you've got DIs, you've got Kempers, you've got Profilers… So, all these things, they sound like cheating, but they're not; they're just better tools to get the job done quicker, and it gives you more time for creativity.

"The bulk of the record was still done in a studio. We recorded with Juan Urteaga. We did the drums there. Gene [Hoglan, drums] laid the foundation down there. And then from there, I was lucky enough to do everything at my house, of course DI'ing everything, so they could be reamped. For those of you who don't know what DI'ing, it's a clean track of your guitar and you can kind of send it back through a different amp, if you wanna get a different sound. So that's definitely the way to go, 'cause you're not stuck with one tone. But, yeah, it's pretty awesome. And then we did the bass and the vocals at Juan's place. And like me, Alex [Skolnick] recorded his solos in New York City. And through the grace of the Internet, we brought it all together and sent it to Andy [Sneap to mix it]. And then we jumped on a plane and we were on tour in Europe and then we were getting tracks in Europe and listening to it through our favorite headphones. My favorite thing to do, though, as far as monitoring music is I like to listen to it in my car; that's where I listen to all my music. So the best way to monitor something when you're mixing is to find what you normally listen to your music through, and that's kind of how we rolled. We really didn't have the luxury of second-guessing anything; we just went for it."

On the songwriting process for "Brotherhood Of The Snake":

Eric: "This one was done a little bit different. We didn't really have the luxury of… I mean, I had the luxury of demoing everything up, 'cause I wrote pretty much probably 98 percent of the music. So I was pretty on it as far as knowing what the songs were gonna be about. The other guys… Alex was pretty busy doing his jazz thing and METAL ALLEGIANCE. Gene was also busy DEATH TO ALL with Steve [DiGiorgio, bass], so I got little glimpses of them here and there, but for the most part, Chuck [Billy, vocals] and I really put this together, the bulk of it, and then presented it to the band, and kind of demoed stuff up and went, 'Okay, here we go. This is it.' And we had a small window of when we could do it, so there wasn't a lot of, like, 'Hey, well, let's do this. Let's try this.' It was, like, 'This is how it is. This is what we're gonna do. And this is the timeframe. And if we don't do it here, we're not gonna have a record out.' So I think we were pretty confident with what we had, and we just went for it."

On the strength of the material on "Brotherhood Of The Snake":

Eric: "I think the key to the success on this one, it truly is not having any compromising on the writing, but then getting players like Steve and Gene and Alex, and then pushing Chuck to be the best Chuck that could be. I think Chuck's even surprised, and I'm even surprised, on even to where we were at in the demos. Like 'Black Jack', for instance, I think Chuck wrote that song, like, five times. And some of 'em were cool, but it was, like, 'That's okay. I don't wanna say, 'Dude, that sucks.'' But when I heard this one, and I think he was so tired of it, I don't even think he realized how good it was until when I walked in, I was just, like… I literally did a backflip. I was, like, 'Dude, this is amazing!' And he was, like, 'Oh, yeah? You like it?' So there was a lot of stuff like that where we both didn't really know what we had because we were just so enthralled in getting this record done and the pressure being on us that we were being creative, but it was more of a battle. You can't plan on how you're gonna kill someone when you're at battle; you're just gonna go out there and be a berserker and fuck shit up."