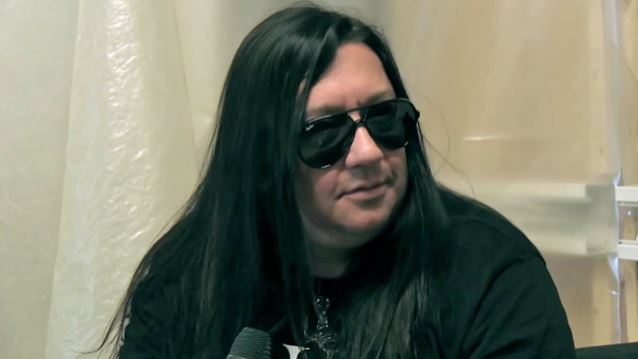 DRAGONLORD, the California-based black metal band led by TESTAMENT guitarist Eric Peterson, is mixing its third album, "Dominion", for a tentative early 2016 release. Peterson told the "Nada Que Hacer" show about the CD (see video below): "I'm pretty much done with the new record. I'm pretty happy with it. It's very, very, very, very melodic and heavy. I'm excited about that. So it'll be killer." Eric also revealed that DRAGONLORD will film a "crazy" music video for the new song "Love Of The Damned".

The new DRAGONLORD CD will feature the drumming of Alex Bent from DECREPIT BIRTH. Eric said: "[Alex] is from a younger age and different though process, but very much influenced from the classic drummers like Neil Peart. He is breathing new life into DRAGONLORD."

Peterson previously said that the third DRAGONLORD album would feature "some pretty mature-sounding symphonic blackened thrash." He added: "It will have more of a melodic touch to it and memorable song structures. It's still gonna be heavy as hell, but it's gonna be a well-rounded record. New songs 'Kings Frost', 'The Devil's Insight' and 'Battle At Mordor' will surely raise the hairs on your back!"

DRAGONLORD's sophomore album, "Black Wings of Destiny", was released in the U.S. in October 2005 via Escapi Music. The follow-up to 2001's "Rapture" (Spitfire Records) was recorded and mixed by Fredrik Nordström (HAMMERFALL, DIMMU BORGIR, ARCH ENEMY) at Studio Fredman in Gothenburg, Sweden.

DRAGONLORD's "Until the End" video: