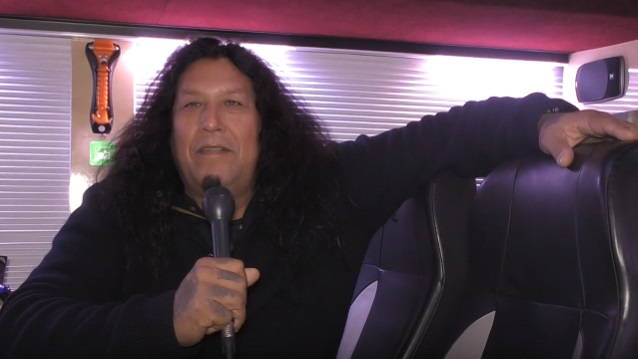 TESTAMENT frontman Chuck Billy has blasted President Donald Trump as "an embarrassment" to the United States.

Billy, whose father is Native American and mother is Mexican, made his comments while taking part in an interview with Austria's Stormbringer.at web site during his band's European tour with DEATH ANGEL and ANNIHILATOR.

Asked for his opinion on the billionaire real estate mogul, Chuck said (see video below): "I don't get real political because I think anybody who is in charge, I never agree with. And the Trump thing, I think, to me, is more of an embarrassment.

"I've never seen presidents act and say things like he says," Billy added. "So hopefully we just get through it and move on."

Billy, a descendent of the Pomo Native Americans, was born in Oakland and spent much of his youth on the Hopland Indian Reservation north of San Francisco. As a member of TESTAMENT, he wrote several songs — including "Trail of Tears", "Allegiance" and "Native Blood" — in honor of his ancestral lineage.

The video for "Native Blood" told the story of a young Native American boy who is teased, then faces prejudice when a girl's father won't allow her to date him, presumably because he is an Indian. In the end, the boy, now grown, strikes back by mobilizing his people and taking to the court to stop real-estate developers from desecrating the Pomo sacred site Medicine Rock.

In January 2013, Billy earned the distinction as the first Native American entertainer to be permanently featured in the memorabilia display at the Hard Rock Hotel And Casino in Albuquerque, New Mexico.

TESTAMENT is still touring in support of its critically acclaimed album "Brotherhood Of The Snake", which came out last year.