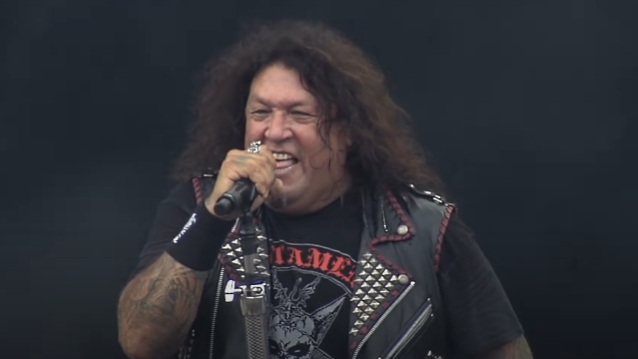 TESTAMENT, EXODUS and DEATH ANGEL played the sole 2021 date of "The Bay Strikes Back Tour" last night (Saturday, November 27) at the Fox Theater in Oakland, California. Fan-filmed video footage of the concert can be seen below. The gig took place less than two months after the three bands shared the stage at the Aftershock festival in Sacramento.

"The Bay Strikes Back Tour" was originally scheduled to kick off on October 6 at the Fremont Theater in San Luis Obispo, California and make stops in Austin, New York, and Detroit before concluding in Oakland. The tour has since been rescheduled to take place in April and May 2022.

When "The Bay Strikes Back Tour" was postponed from its original time frame, TESTAMENT guitarist Eric Peterson said in a statement: "We were really on the fence with this decision. But seeing other bands make it through with a few mild cases and other bigger bands just canceling their entire tours, we felt it is in our best interest to postpone these shows to '22."

Added TESTAMENT guitarist Alex Skolnick: "It gives none of us any pleasure to be the bearers of bad news yet again, but here we are. Although 'Bay Strikes Back' is a top tour package for theaters, the reality is this: It can’t afford to take the risks that top-grossing larger venue tours have been taking. The type of disruptions KISS and other large outdoor venue tours have experienced could cause our shows to be permanently canceled — a lose/lose for everyone. The fact that a lower budget tour such as ours is limited to indoor venues with tight backstage space only adds to the risk. It should go without saying that calling off these dates was a 'last resort' decision, and everyone involved would much rather this weren't the case. However, this is the new reality we're all in. All we can do is hope for everyone's understanding, which we ask for sincerely."

EXODUS guitarist Gary Holt said: "We are saddened to announce that 'The Bay Strikes Back Tour' is being postponed, but the risk of cancelled shows due to positive tests leading to tour personnel being quarantined and isolated is just too great at this time. We want to feel safe, enjoy the tour and be able to hang out with our close friends. The silver lining in this is that [EXODUS's cancer-stricken drummer] Tom Hunting no longer needs chemo and will have more time to work his way back to doing a full tour."

"Usually when I'm asked to contribute a quote to an announcement, it pertains to something I'm extremely excited about," said DEATH ANGEL vocalist Mark Osegueda. "In this case, I'm gutted… It pains me to announce that 'The Bay Strikes Back' U.S. tour is being postponed. No one was looking forward to this more than me. But, on the brighter side of things, the tour is in fact going to happen — just at a later time. And I can assure you that the already ravenous to play live members of DEATH ANGEL promise to provide a crushing set during a crushing tour. The Bay WILL Strike Back!"

"The Bay Strikes Back Tour" dates:

All tickets purchased for the original dates will be honored for the new dates. Refunds will be available at point of purchase.

Last month, TESTAMENT's Chuck Billy and EXODUS's Steve "Zetro" Souza released a 40-minute video in which they went in depth about the two bands' decision to postpone the North American leg of "The Bay Strikes Back Tour" to 2022. Speaking about the thought process behind pushing back the tour, Chuck said: "I called Zet and I called Will [Carroll, drums] and Ted [Aguilar, guitar] from DEATH ANGEL and just wanted to hear what everybody's thoughts were. And the most important thing, I think, came back as that when we did the European leg [in February/March 2020], we all had such a great time. It was the first time where you go out and there's not a band that you met that you've gotta get to know and hang out with. Where we came into it as, like, 'Hey, buddy.' We're all pals flying out together. It didn't feel like starting a tour. And at the end of it, we all had a good time. No attitudes, no problems.

"We said, 'This has gotta go to America. This has to go everywhere,'" he continued. "We were saying that. The most key thing was, you know what? Remember how much fun we had? I was talking to Tom [Hunting, EXODUS drummer] about it and Gary [Holt, EXODUS guitarist]. We had a great time. Do we wanna do America and not have fun, not enjoy ourselves?

"'Cause I did talk to other [bands who were recently] on tour, and the consensus was it wasn't fun. And we were, like, do we wanna go do that? We wanna have fun. I think we're bands that like to go out and talk to the fans. We don't hide and run from fans."

Added Zetro: "Then there's the whole cost factor. Buses cost money. Crew cost money. We're not rich rock stars. We live off the business, and we're very fortunate to do so, but we still have to look at it from that angle. And if we go out for three weeks, and we've printed all this merchandise with the dates on the back, and Chuck gets sick. Are you gonna get a new singer for TESTAMENT? You can't do that. You can't replace it. So the tour's now over with. 'Cause DEATH ANGEL and EXODUS are not gonna go, 'Well, TESTAMENT's dropping off. We're just gonna continue.' That's not the package. That's not how it works. Gary gets sick. Over with. Zetro gets sick. Over with. Tom, who's just coming back from his whole ordeal with cancer. Tom gets sick — done, over, tour over.

"And, again, we're talking to our friends on other tours. We're getting the feedback from the crews. And they're telling us what's going on and what a nightmare it is. 'And yes, we're there working, but we're isolated on the bus.'

"I've always said, as soon as it's not fun anymore, I don't wanna fucking do it anymore," Zetro said. "So if we're gonna go out there for five weeks, and you're gonna basically put me in a rolling prison, I can't do that. On days off, we have to be accountable for. I like going to the movies or going to games and stuff on days off. I can't do that, 'cause if I go out and I get exposed and I expose everybody, it's just the way… We have to tour in a bubble, basically."

"So many restrictions in venues in different cities are different. You've either gotta have the shot or show proof… So, as time goes by, I think it's all gonna open up better.

"First of all, we've seen the world change. 'Okay, there's daylight. Things are getting normal.' And then the delta variant hits," Chuck added. "We're, like, 'Oh, here we go again.' Things are changing — shutdown, restrictions are coming back. We thought we booked this tour knowing by the time October comes around, it's gonna be free and clear. And it changed on us. So that was the sucky part for us." 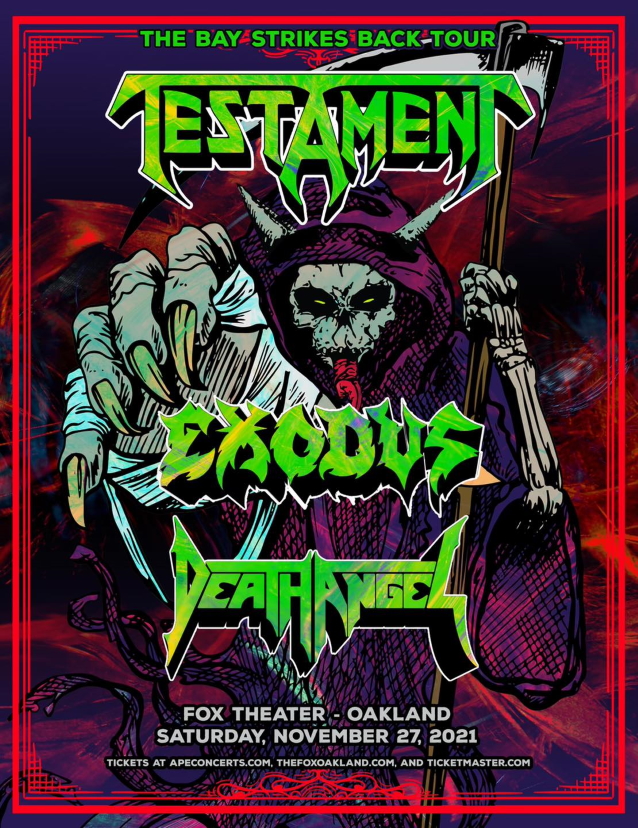