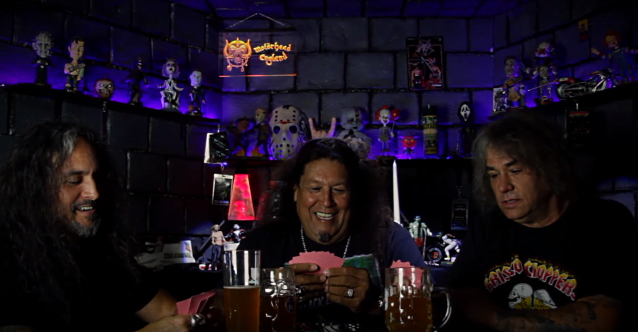 TESTAMENT, EXODUS and DEATH ANGEL will join forces for "The Bay Strikes Back 2020" European tour. The trek will kick off on February 6 in Copenhagen, Denmark and will hit 25 cities before concluding on March 11 in Hannover, Germany.

Mark Osegueda (DEATH ANGEL), Chuck Billy (TESTAMENT) and Steve "Zetro" Souza (EXODUS) recently talked about "The Bay Strikes Back" tour over some drinks and a card game. Check out the five-minute clip below.

Billy commented: "It's finally happening!!!! All of us have spoken over the years of how killer it would be to tour together and bring Bay Area thrash metal across the world and we are starting in Europe. I'm sure I can speak for all three bands in saying that we are proud of where we all came from and we are still delivering some of the best thrash metal we can to the fans. Be ready for 'The Bay Strikes Back' tour 2020.”

Added EXODUS's Gary Holt: "I am fired up to FINALLY return to Europe with EXODUS! Along with our Bay Area friends TESTAMENT and DEATH ANGEL! An epic tour for the ages! Looking forward to crushing everyone Bay Area style! See you there!!! I cannot wait!"

DEATH ANGEL's Rob Cavestany said: "We couldn't be more excited to announce our upcoming tour with TESTAMENT and EXODUS! Bay Area thrash attack IN full force! All three bands have been close friends for decades and our mutual respect is of the highest level. That said, we will surely push each other to go beyond expectations each and every night. This is a first — the three of us have never toured together in the same package... it's about time! See you in the pit!"

DEATH ANGEL's ninth full-length album, "Humanicide", was released in May via Nuclear Blast Records. For the fourth album cycle in a row, DEATH ANGEL returned to producer and friend Jason Suecof (DEICIDE, TRIVIUM) of Audiohammer studios for the recording and mixing, along with the mastering of the legendary Ted Jensen (SLIPKNOT, PANTERA) of Sterling Sound, who added the final touches and brought it all to life, with artist Brent Elliott White (LAMB OF GOD, MEGADETH) providing the ominous cover artwork. 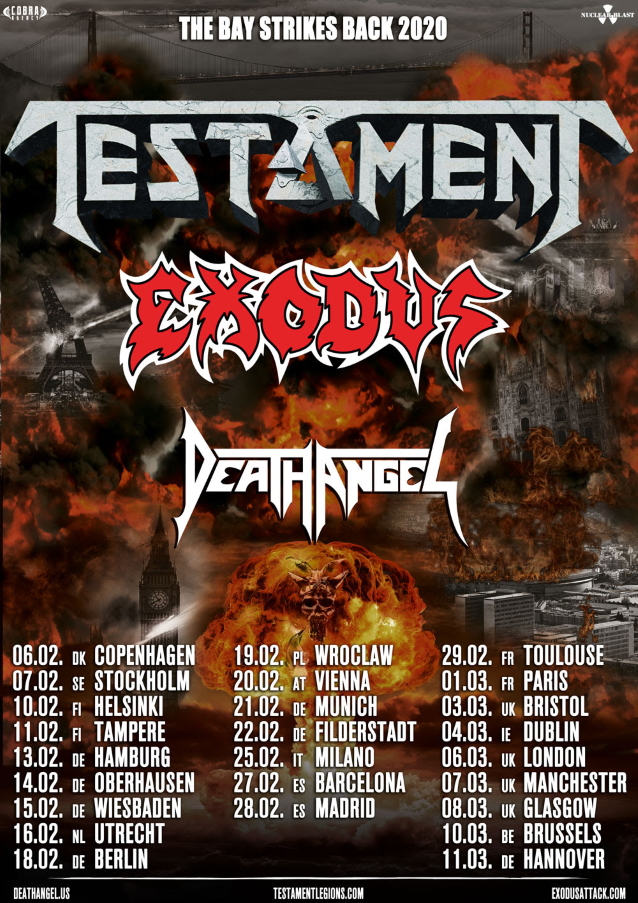