Commented TESTAMENT guitarist Eric Peterson: "I'm super stoked that Nuclear Blast, 'the best metal label on earth,' is re-releasing the rebirth of TESTAMENT era featuring 'Demonic' and 'The Gathering'. These two albums brought us back to life with ultra-heavy and unrelenting fury and melody. Also '87's live classic in full, 'Live In Eindhoven', and re-recordings of our classics, 'First Strike Still Deadly'. These classic records feature revamped art to boot that are unapologetic to their themes as they were."

Added vocalist Chuck Billy: "I am more than excited to have Nuclear Blast re-release part of our catalog that has been in need of a good home. Nuclear Blast has taken these albums in and will help TESTAMENT bring something killer to our fans."

The reissues of all five albums will feature stunning new artwork by Marcelo Vasco (SLAYER, KREATOR, HATEBREED) and be released both as digipak CD and on black vinyl. "Demonic", "The Gathering" and "First Strike Still Deadly" will also released on silver vinyl (Nuclear Blast mailorder exclusive)

TESTAMENT's latest album, "Brotherhood Of The Snake", was released last October via Nuclear Blast. The cover was once again created by renowned artist Eliran Kantor, who also handled the art for the TESTAMENT's previous album, 2012's "Dark Roots Of Earth", and worked with bands like HATEBREED, SOULFLY and KATAKLYSM in the past.

TESTAMENT will embark on a European tour in the fall. Support on the trek will come from ANNIHILATOR and DEATH ANGEL. 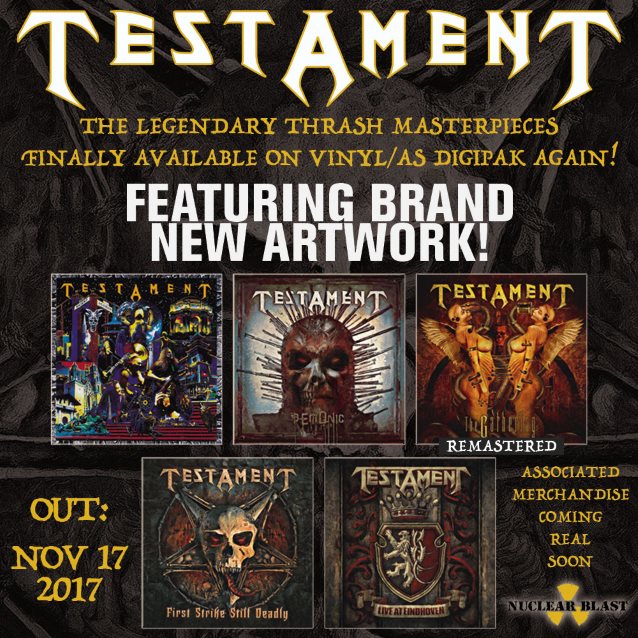