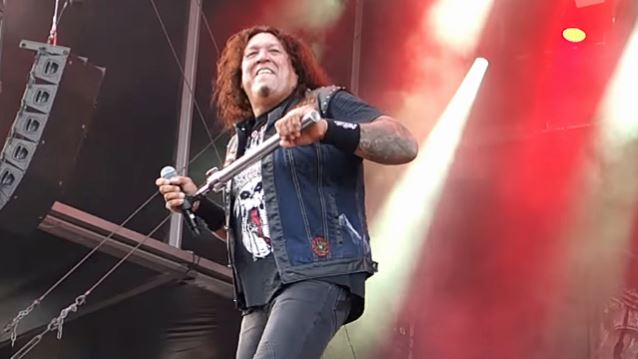 In a brand new interview with Eonmusic, TESTAMENT frontman Chuck Billy confirmed that he auditioned for the lead-singer position in SEPULTURA when Max Cavalera quit the latter band in 1996. "Yeah, around that time was right before [TESTAMENT made] the 'Demonic' record, so we had finished our Atlantic [Records] contract, and we were shopping for a new deal," Chuck explained. "We didn't really have a deal yet, and at the last minute, I just said, 'You know what? Maybe I should try to find a band that's solid, that's going to keep touring and continue on,' and at that point, SEPULTURA was taking auditions, and I think it was at the end [of the audition process] that I decided, 'Screw it, I'm going to do it.' I think I did three songs; I did 'Refuse/Resist', I did 'Territory', and I wrote my version of 'Choke', and gave it to them. But by the time I had delivered, they had already made their decision for [the appointment of new singer] Derrick [Green], which in the end, was probably the way it all should have worked out."

SEPULTURA guitarist Andreas Kisser spoke about Billy's audition for the band during a 2015 appearance on "The Jasta Show". He said: "Chuck [laid down his vocals over] the [demo version of a then-new SEPULTURA song called] 'Choke' … Because we sent the instrumental [version] of a new song [to prospective singers to record their vocals over]. We didn't want anyone to sing 'Roots [Bloody Roots]' or 'Refuse/Resist', because we didn't want a clone. We wanted somebody to bring new ideas, to bring SEPULTURA to a different path, to a different level. And Chuck Billy, he did… He used more of the guttural [vocal style on his audition tape]. And it works. Because, recently, we did a 'Metal Allegiance' jam at NAMM in Los Angeles, and we played some SEPULTURA stuff with Chuck Billy singing, and it was great, man — it was great. So he did a great job. But, you know, he's Chuck Billy; he's TESTAMENT. We wanted somebody new."

A two-minute snippet of Chuck Billy's SEPULTURA audition tape can be streamed in the YouTube clip below.

TESTAMENT's twelfth album, "Brotherhood Of The Snake", is being released today (Friday, October 28) via Nuclear Blast.