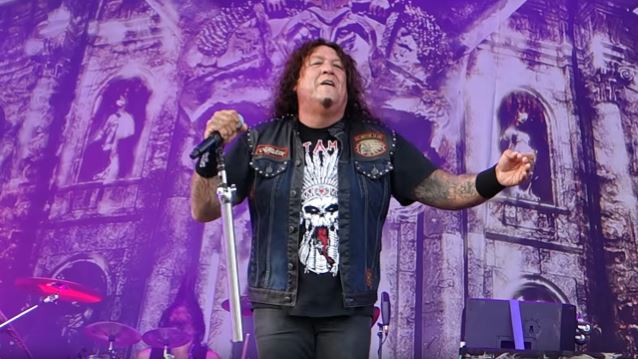 Aniruddh "Andrew" Bansal of Metal Assault recently conducted an interview with TESTAMENT vocalist Chuck Billy. A couple of excerpts from the chat follow below.

Metal Assault: Based on first impressions of the band's new album, "Brotherhood Of The Snake", I'd say is thrashier than the last couple of albums. Would you agree with that?

Chuck: "Yeah, it's thrashier. I think when we started the process of writing the new record, we definitely knew we wanted to speed things up a little more than 'Dark Roots Of Earth'. For one, we wanted to get a bigger drum sound on this one. I also wanted to stick to singing melodically without using a lot of the the death voice. We feel that we accomplished everything we set out for."

Metal Assault: That's interesting, man. What was the reason for trying to get more of the traditional clean singing instead of the death metal growls?

Chuck: "I think the songs were just set up that way. I've sat on these songs for quite some time, so as I was hearing them in my head, I had more time to really think about them. It just came out as me not using that other voice as much. At certain times I think it was called for, on some of the songs, but for the majority of it I felt it needed the vocals to be a lot cleaner, and for the singing voice to be really heard. The last album was the first one I tried recording without using a lot of delays, reverbs and slap-backs on the lead vocals, whereas it seemed to be that on the past records before, it got a little washy for me. The last record dried it up and I liked that feeling, so I wanted to go for that approach again on 'Brotherhood Of The Snake', but just have it more in your face, vocally, without it being washed up and having a bunch of tricks on it.

Metal Assault: These days it's a four-year time period for you between albums. "The Formation Of Damnation" came out in 2008, "Dark Roots Of Earth" in 2012 and now the new one this year. In the past, of course, it didn't take as long and you didn't really need to tour as much, I guess. Do you sometimes miss that era, or do you find it better now with the way you're working?

Chuck: "Well, in the past era we all lived closer to each other, and getting in the rehearsal room was probably a lot easier. But now it's a process and everybody doesn't live near each other. So to rehearse, we have to fly everybody in. So it's more of an ordeal to work that way now, but we definitely didn't want to wait four years to release this one. We really wanted to get it out two years after 'Dark Roots…', but it just didn't happen. We know now that we don't want it to happen like last time and go through a two-year writing process. Hopefully in two years, we'll have another record ready to go. So, we're consciously aware of that now. After finishing this record, it was like, 'Okay, that didn't happen the way we wanted it to.' So we better start working on new music for the next one now. There's nothing wrong with that."