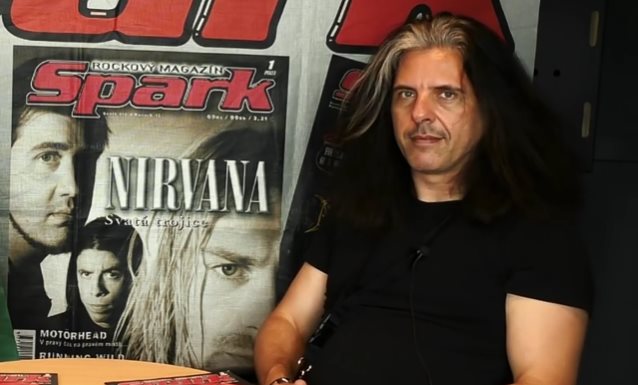 Spark TV, which is part of the Czech monthly magazine Spark, recently conducted an interview with TESTAMENT lead guitarist Alex Skolnick. You can watch the full chat below. A few excerpts follow (transcribed by BLABBERMOUTH.NET).

On the recording process for TESTAMENT's new album, "Brotherhood Of The Snake":

Alex: "This one was done in a bit of a rush. There was a lot of touring. I think this is probably the most I remember doing with the band within a year since the reformation about ten years ago. And we kept putting off doing the record. I think we had a couple designated time slots and they just couldn't happen. Then finally it got to the point where it just needed to happen. It's definitely more of a riff-based record. I contributed some solos. I did contribute some parts. I know there's been a couple of miscommunications about my contributions on the record. The song 'Neptune's Spear', the melodic part, that was a song we had for the previous album, but the melodic guitar harmony part at the end with all of the counterpoint, that was something I had laying around for a long time. That's on there. Some of the riffs were parts that Eric [Peterson, guitar] and I came up with together during a writing process about a year and a half ago. As far as the whole song structures, it was more Eric and more of his parts on this, which is fine. But I don't want to say anything negative… I think it's a great-sounding record. It's powerful. I wouldn't say it's the most representative of the band as far as my contributions, but it came out well. I think not all of the records need to sound the same. I think it works. Some people have commented to me that they miss more of the single note and harmonic thing that I bring to it, but I think it also works. Some of the parts were really fun to just to come up with solo ideas on top of. 'The Pale King', that was really fun. I thought Eric gave me a great little chord progression that has a key change in it, so that's where I get really excited."

On the "straight-ahead" nature of the new album:

Alex: "There's a lot of great straight-ahead records, like an AC/DC record; a lot of other bands, too. This is more like that. Me, personally, I like to get a little experimental. I like to throw in the odd track, like 'Dangers Of The Faithless' [from 2008's 'The Formation Of Damnation'] which had different time signatures, different keys, but I don't need to do that on every record."

On if the recording process was relaxed for him:

Alex: "Definitely not. Again, the band has been touring a lot. I have a whole world outside of the band as well. The band is definitely a priority and I've scheduled everything around our touring, but we've toured so much. The brief period where they were actually able… It was really Chuck [Billy, vocals] and Eric — they weren't able to fly the rest of us in and have us all play around, which I think is ideal, but for this record, it wasn't relaxed because it was so quick. All of the sudden we had this deadline: 'You need to do solos now, get in the studio.' 'Okay!' It was quicker in a way because there wasn't that period of jamming together and arranging the songs together and me showing songs structures, full song structures that the way I was hearing them, like on the previous records. But it was still very intense."

On if he's looking forward to playing new songs live:

Alex: "I think so. I think there's at least a couple going in there. We've been lucky that the newer material has been accepted by the fans. When I mean 'newer material,' since we got back together. The last record, 'Dark Roots Of Earth', right away, it just seemed to be a familiarity with those songs. And the songs we've done — I think we've done half the record at different times, never in the same show, there's always a sense of familiarity, like people know them and it doesn't feel like, 'Yeah, get back to 'The New Order' or 'Practice What You Preach'.' This fits right in as well."

TESTAMENT's twelfth album, "Brotherhood Of The Snake", was released on October 28 via Nuclear Blast.