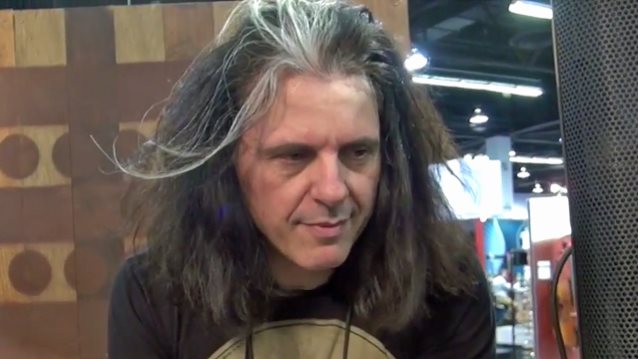 During a short interview in the Seymour Duncan booth at this past weekend's NAMM show in Anaheim, California, TESTAMENT and METAL ALLEGIANCE guitarist Alex Skolnick was asked how he has managed to survive in the music industry thirty years after the release of TESTAMENT's classic debut album, "The Legacy". He responded (see video below): "I think I've followed my own path. I like the music I like. Even though I started early with a band that's very hard music, I've always listened [to] and played whatever music I like. And I spent a few years only playing instrumental music, and then I went back to TESTAMENT when nobody thought I would. And then when I went back, nobody thought I would still do instrumental music. So I'm gonna do whatever I want."

He continued: "I think those of us that survive the music business, we follow our passion and we don't try… 'Cause if I tried really hard just to be what people expect me to be, I'd get covered in tattoos and I'd have some image that's not really me. So I never did that. And I think those who, sort of, do what they feel are the ones that survive in this crazy music industry."

A televised performance of the MILES DAVIS ELECTRIC BAND in the late '90s led Skolnick to New York City, where he immersed himself in the jazz world. For the past decade, Skonick has led a double life as a member of TESTAMENT, the seminal thrash metal band he joined at the age of 16. In the summer of 2016, he's both toured Europe with TESTAMENT and performed with Miles's keyboardist, Alan Holzman.